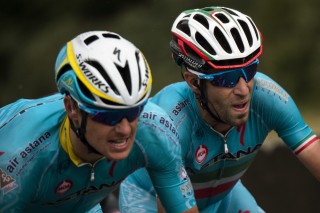 Defending champion Vincenzo Nibali was among the contenders who were caught out in a windy, rainy second stage of the 2015 Tour de France. Photo: AFP
PAU, France (AFP) — Reigning Tour de France champion Vincenzo Nibali says he’s not panicking despite a poor first week in which he lost almost two-and-a-half minutes to Chris Froome (Sky).
The 30-year-old Italian appeared to have got off to a flying start when he beat all three of his ‘fantastic four’ rivals in the opening stage time trial during a heatwave in Utrecht, Netherlands.
But since then, as the weather changed, the Astana leader has rolled from one blow to another, casting doubt on his hopes of overall victory.
He lost a minute-and-a-half to race leader Froome, the 2013 champion, on the windy stage 2 to Zeeland, another 11 seconds to the Briton on the stage 3 finish up the Mur de Huy, 10 more seconds on a similar finish on the Mur de Bretagne on Saturday and then more than 30 seconds in Sunday’s team time trial.
He currently sits 13th overall, two minutes and 22 seconds behind Froome and behind both Alberto Contador (Tinkoff-Saxo) and Nairo Quintana (Movistar) as well.
But he’s not worried.
“I’m in good form, but not every year is the same. The only thing to do is keep calm and pedal,” he said during Monday’s rest day in Pau.
“I’m feeling serene because I know I’ve done my best. There was a lot of pressure from fans and the media.
“I’ve had some highs and lows. On the Mur de Bretagne, I had a bad day. It was a very difficult finish. But Alberto (Contador) had the same thing on the Mur de Huy [where he lost 18sec].”
Quintana is only 23 seconds ahead of Nibali on the standings in ninth but is considered by most to be the best climber in the world. Nibali agrees with Froome that Quintana could be the man to watch in the mountains.
“He’s hiding, we never see him [at the front of the peloton]. Froome is certainly in the best form but Nairo [Quintana] hasn’t yet shown what he’s capable of,” said Nibali.
Froome may have appeared impregnable so far, but Nibali believes he will eventually run out of steam, if not from Tuesday’s start of the Pyrenean stages, then perhaps in the third week when the race hits the Alps.
“We’ve not seen anything yet in the mountains, but we’ll certainly know more after [Tuesday’s finish at] La Pierre-Saint Martin,” Nibali said. “Right now we know Chris [Froome] is in form, but [Nibali’s trainer] Paolo Slongo thinks he might come unstuck in the Alps.”
The post Nibali keeping calm despite deficit appeared first on VeloNews.com.

Velonews: Prospects Of Olympic Gold Could Lure Nibali To 2016 Tour

Velonews: Prospects Of Olympic Gold Could Lure Nibali To 2016 Tour