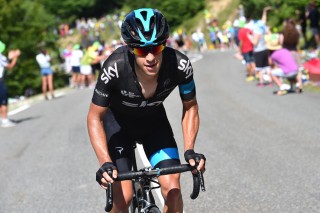 Richie Porte will race alongside new teammate Tejay van Garderen in France next summer. Photo: Tim De Waele | TDWsport.com
MILAN (VN) — BMC Racing has something it never had before: a “1-2 punch” for the Tour de France. That’s perfect for the squad because according to general manager Jim Ochowicz, the 2016 route suits American Tejay van Garderen as much as his new hire, Australian Richie Porte.
BMC signed Porte over the summer after he rode the last four years with British team Sky. Porte helped Bradley Wiggins win the Tour de France in 2012 and Chris Froome twice, in 2013 and 2015. He will team up with van Garderen, who placed fifth overall in the 2012 and 2014 editions of the Tour.
Though the Tour is still eight months away, starting July 2 from northwest France, both riders are due to lead in BMC’s red and black colors. Ochowicz relishes the chance of taking two contenders.
“That opportunity is here for us to make a bigger result. We are confident that [Porte] and Tejay together can do a lot of good things as a unit,” Ochowicz told VeloNews.
“[It’s a plus having two equal leaders] with the complexity of the race, the crashes that eliminate contenders every year. Having the ability to have a 1-2 punch puts us in a similar position as Movistar and Sky, and some other teams that we’ve been racing against.”
BMC won the Tour in 2011 with Australian Cadel Evans, a year in which van Garderen had yet to hit full stride. A year later, Van Garderen rode to fifth and won the white jersey for the best young rider classification. In 2014, he again placed fifth.
This July, a respiratory infection and a fever wiped him out and forced him to abandon during stage 17 while sitting third overall. With Porte and van Garderen, Ochowicz said he will have some insurance in case one has to quit due to an incident.
Porte said in an interview with Fairfax Media he and van Garderen can “deal with” joint leadership and that one would be honest with the other if he was not feeling well.
“I’m not worried,” continued Ochowicz. “Of course there could be some disagreements from time to time, but knowing both of those guys, the staff that works with us, the communication is going to be constant. I don’t think we are going to be getting into places where we’ve left something behind somewhere in a different race and it’s festered something into bigger than it really is.
“We are good at addressing problem issues, whatever they might be. We have not had issues historically with our riders, and I don’t expect to have anything like that with Richie and Tejay either.”
Ochowicz instead is focusing on the 2016 Tour route, which organizer ASO presented last week, and preparing for the first team meeting in November when he will meet with his two Tour stars for the first time together.
The Tour lacks an opening time trial and a team time trial, stages that BMC won in 2015. However, the organizer also eliminated the pavé stages and stayed in France in the first week instead of racing on the technical roads of the Netherlands and Belgium.
“It’ll be a lot saner from the start. And it’ll be a little tighter GC battle, which is good for us with two contenders,” Ochowicz added.
When asked if the 3519-kilometer course suits one of his stars over the other, Ochowicz said “no.”
“They both have an equal advantage in terms of the race course,” he said. “It’ll depend on some elements that we have no idea about, like the weather or something. Generally speaking, it should favor both of them equally.”
The post Ochowicz: Porte, van Garderen to co-lead BMC at Tour appeared first on VeloNews.com.