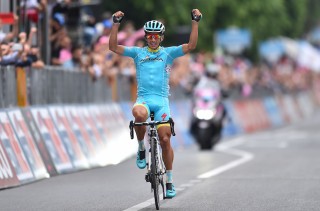 Paolo Tiralongo (Astana) launched a late attack to win stage 9 of the Giro d’Italia on Sunday.
Meanwhile, race leader Alberto Contador (Tinkoff-Saxo) held onto the maglia rosa after sticking with his prime rivals — Fabio Aru (Astana) and Richie Porte (Sky) — through the final steeps of the 215km race from Benevento to San Giorgio del Sannio in southern Italy.
“We’ve been riding great all week, and we wanted to win a stage,” said Tiralongo. “We’ve been close, and today was my chance. I attacked at the right moment, and had the legs to finish it off.
“This is a great way to finish the week. Now I will work to help Aru in this Giro.”
Steven Kruisjwijk (LottoNL-Jumbo) took second on the day, 21 seconds down, with Simon Geschke (Giant-Alpecin) third at 23 seconds.
Aru attacked in the finale to take back a second from race leader Contador and remains second overall at three seconds down. Porte stayed third at 22 seconds.
Rigoberto Uran (Etixx-Quick-Step) was perhaps the main victim of all the action on the ascents. He finished well back and now sits eighth overall at 2:10 down going into the Giro’s first rest day.
“The stage was pretty controlled all day. The last climb was pretty far from the finish, so I wanted to race it a little bit more conservative,” said Contador. “I leave behind the first week with the jersey, so we can be satisfied.
“Today, we got some time on a rider like Uran, so that was important. Aru took back a second on me, but that’s not so important. I am happy to keep the jersey, and I hope the Giro continues like this. Tomorrow, above all, I will rest and recover. I will work with the massage therapist, and recovery.”
Uran, too, is looking forward after a rough start to the Giro.
“The first week didn’t go as well as I had hoped,” he said. “I have been a little sick, but the most important stages are still ahead of us. I have good form, I hope to show it later in this Giro.”
The post Paolo Tiralongo wins stage 9; Alberto Contador holds Giro lead appeared first on VeloNews.com.