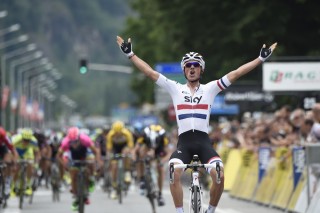 Peter Kennaugh will hold onto his British road champion's jersey going into the Tour de France. Photo: AFP (file)
Peter Kennaugh defended his British road race title on Sunday as Team Sky claimed three of the top four places.
Kennaugh and teammate Ian Stannard were off the front on the undulating circuit around Lincoln until Luke Rowe and Mark Cavendish (Etixx-Quick-Step) joined them on the penultimate lap of the day.
When Kennaugh jumped, Cavendish followed, and the two slugged it out on the cobbled Michaelgate climb, with Kennaugh emerging triumphant — just the third rider in history to retain the white jersey. Cavendish held on for second place, five seconds back, with Stannard pipping Rowe for thtird.
Kennaugh said it was one of the toughest races he’d ever been part of.
“From 3km in when we split it in the crosswinds, we were constantly on the pedals,” he said. “On the climb we were doing two-minute efforts at full gas and it eventually caught up with us. My legs were starting to cramp on the last lap and fill with lactate, but I had to give it everything at the line.
“I didn’t think I’d won it until the last right-hand bend when I saw Cav wasn’t on my wheel. Up until then he’d been incredibly strong and hats off to him, I’m sure he’ll get this jersey again another year.”
The post Peter Kennaugh prevails in battle with Mark Cavendish over British road race title appeared first on VeloNews.com.