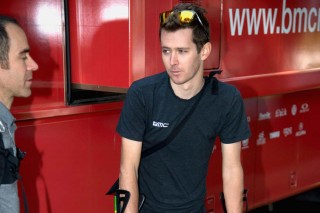 Peter Stetina stopped by the BMC bus to wish his teammates good luck at the Amgen Tour of California earlier this year.
Photo: Casey B. Gibson | www.cbgphoto.com
Peter Stetina (BMC Racing Team) can see the finish line in his recovery process from a horrific injury sustained in an early April crash.
“I do plan on racing still this year,” Stetina told reporters via teleconference earlier this week.
On April 6, the Vuelta al Pais Vasco peloton came barreling down a narrow street in Spain toward the finish line of stage 1. Unbeknownst to the riders, two metal poles stood exposed on the right side of the road, causing several riders to crash into them at roughly 60kph with Stetina coming out of the crash with the worst injuries.
Stetina “suffered multiple broken ribs, a minimally displaced lateral tibia fracture, and a complex fracture of his kneecap,” said BMC Racing team doctor, Max Testa. “[The kneecap] basically was exploded into multiple fragments.”
This forced Stetina to spend a week in a hospital in Spain to have a plate inserted in his leg and his kneecap wired back together.
A timetable for Stetina’s return has not been set, but he and his team are optimistic he will return to racing in the next couple of months.
“I fully believe, and I am extremely hungry to come back to what I was before, if not better,” Stetina told reporters. “I plan on being full strength by next year.”
“I gotta set my goals high,” Stetina said. “I know I’ll be basically a shell of myself for the rest of this year, but if the BMC directors, team, and the medical team are behind us, I can hop into a few races, help the guys early on, make the groupetto, finish a few races; it will set me up better for the off-season where I can focus on left versus right leg imbalances, and regain some of the muscle I’ve lost.”
In a year when rider safety has come strongly to the forefront, the incident at Pais Vasco stands above the rest. “Rider safety is a hot topic, and my crash can be one of the better-used examples,” Stetina said. “This is just so out of the ordinary, for rider safety, I don’t want my case to be brushed under the rug until something else bad happens.”
When pressed about whether he’ll seek legal options, Stetina gave nothing away, simply saying, “Legally, we’re looking at all our options.”
There is light at the end of the tunnel, Stetina said, as last week he underwent surgery in his adopted hometown of Santa Rosa, California to remove the wiring in his kneecap. “It’s a game of patience,” Stetina said. “It’s definitely been hard, not being active for so long. You realize how you take everything for granted.” The recent surgery has prevented Stetina from getting back on the bike for now, but in the long run, he should return to competition earlier than was initially expected.
As for future plans, Stetina did not comment on his 2016 contract, referring to his agent while noting that he is confident something can be worked out. He complimented BMC’s support through the recovery process. “I’m convinced BMC is the best team on the planet in terms of their medical, team, and rider support,” Stetina said.
Stetina has looked to teammate Taylor Phinney, who is also recovering from a racing accident, for help in the recovery process.
“I’ve definitely taken some inspiration from Taylor’s crash,” Stetina said. “[Phinney] told me that the toughest part is sitting and the waiting and getting out of your own head.”
When asked about taking up a new hobby, like Phinney has with painting, Stetina jokingly said, “I got a woodworking set just for fun. Maybe I’ll make a few kitchen spoons, and it’ll blossom from there.”
The post Peter Stetina: ‘It helps to see the light at the end of the tunnel’ appeared first on VeloNews.com.