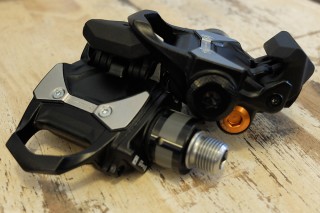 The P1 pedals measure power using vector forces and weigh a claimed 398 grams for the pair. At $1,200 the P1 is positioned to be just a few hundred dollars less expensive than the Garmin Vector pedals. Photo: Logan VonBokel | VeloNews.com
PowerTap has taken up residence on the crankset with its P1 pedal-based power meters and the chainring-based C1. Although it’s not abandoning its home of 15 years — the hub. Rather, PowerTap says that expanding its offerings will make it the the only brand “with a complete portfolio of power meters for multiple locations.”
Yet it still believes the hub to be the most reliable place to read power, which it emphasized by unveiling a new G3 disc brake hub, as a well as a new head unit, the Joule GPS+, which is nearly identical to the Joule GPS in every way, but now has Bluetooth Smart connectivity, for tethering to smartphones and uploading rides wirelessly.
Both the C1 and P1 power meters sport the same Bluetooth connectivity that allow them to be paired with other Bluetooth devices for recording power, but also for updating the power meters’ firmware.
P1 Pedals
The P1 pedals, even more so than the C1 chainrings, are a major departure from a hub-based system because of how they measure power. Rather than being able to measure true “power,” which is measured in the drivetrain either at the crank or the hub, the new P1 pedal measures vertical and horizontal force vectors at the pedal. The P1 takes those force vectors and converts them into a power number. Of course, PowerTap claims that the P1 will be just as accurate as any other power meter, within +/- 1 percent.
Available in May at $1,200, each P1 pedal is powered by a single AAA battery, which gives the P1 a battery life of about 60 hours. Using a AAA battery allows the rider to easily replace the battery if they stop at a gas station during the ride or even carry a couple spare batteries in their saddle bags, rather than coin-cell batteries, which can be hard to find at convenience stores and easier to lose.
The P1 will be compatible with Look Keo-style three-bolt cleats. The new P1 pedals do add some weight compared to non-power meter pedals. A pair of P1s weigh in at 398g, while Keo Classics weigh 280 grams, and Shimano Dura-Ace pedals weigh 248 grams. A pair of Garmin Vector pedals weighs 350 grams.
Compared to other pedal-based power measurement, the P1 appears to be an improvement, at first glance. Lacking separate “pods,” like those on the Garmin Vector or Polar Power, the P1 does not require a special installation process or even a torque wrench. This makes it much easier to swap the pedals between bikes. PowerTap claims that the P1 learns the angle of install and crank length after just a few revolutions thanks to the built-in gyroscope.
C1 Chainrings
When riders think of drive-side, crank-based power meters, they think of the Quarq, SRM, and Power2Max. Each of the aforementioned power meters use a spider-based system, but the C1 is truly a chainring-based system. It’s easier to install, though that limits compatibility.
Available in early summer at $700, the C1 is compatible with compact five-bolt 110 BCD cranksets. The C1 will be available in three chainring variations — 50/36, 52/36, and 53/39. PowerTap was not able to offer the C1 in a true compact combination, like 50/34, because of the limited real estate between the compact spider for power sensors and an ATN+/Bluetooth transmitter.
The C1 chainrings are one piece that installs on the inside of the crankset. Riders cannot swap between the FSA-made proprietary chainrings without sending their C1 back to PowerTap for recalibration. The C1 is powered by a CR2032 coin cell battery that PowerTap has a 200-hour life. The C1 adds a claimed 150 grams to a normal set of FSA chainrings.
Power is measured inside the five “petals” between the chainrings and the chainring bolts. PowerTap claims that the C1 can measure left/right power with the C1 using an algorithm similar to Quarq software. Of course, this isn’t “true” left/right power, but a close estimate.
We hope to test the P1 and C1 later this season and maybe even convince PowerTap to machine us some 46/36 chainrings for cyclocross this fall.
The post Powertap launches pedal- and chainring-based power measurement appeared first on VeloNews.com.