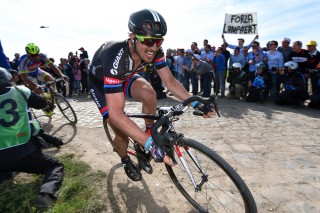 John Degenkolb is one of several German riders who have raised the country's cycling profile. Photo: Tim De Waele | TDWsport.com
Weeks after London balked at a chance to host the start of the 2017 Tour de France, the German city of Dusseldorf looks poised to step up.
In late September, London surprised Tour officials when it pulled out of plans to host the Tour’s grand départ. Dusseldorf, which was already taking aim at the 2018 Tour, is expected to earn the bid for 2017.
“It would be a great opportunity to host the grand départ,” city mayor Thomas Geisel told the German wire service SID.
The city council is expected to vote next week on appropriations to clear the way for the bid to host the Tour’s start in two years.
If approved, the return of the Tour to Germany would be a boon for cycling, as well as confirmation of Germany’s cycling revival over the past five seasons.
Germany has hosted the start of the Tour on three occasions, with Cologne in 1965, Frankfurt in 1980, and West Berlin in 1987.
Cycling boomed in Germany in the 1990s, with the rise of the Telekom team and Germany’s first ever Tour victory with Jan Ullrich in 1997. The Tour of Germany emerged as a major race, but things quickly unraveled in the wake of devastating doping scandals in the 2000s. German public TV stopped broadcasting the Tour and sponsors turned their back on the sport.
The imminent arrival of the Tour’s start to Dusseldorf signals an important revival of the German cycling market. As Europe’s largest economy, and home to an avid cycling community, Germany represents an important and largely untapped market for elite racing.
A new generation of riders, with the likes of Tony Martin, Marcel Kittel, John Degenkolb, and André Greipel, have helped spur renewed interest and confidence in the sport. German sponsors are also returning to the peloton, including Bora, Alpecin, and Lidl, which will become a co-sponsor at Etixx-Quick-Step next year as Kittel makes the switch the Belgian outfit.
The uptick of interest beyond French borders means big money for Tour owners Amaury Sports Organisation (ASO). Since 2007, the Tour has started outside of France six times, with the price tag estimated up to $10 million for ASO.
Earlier this month, the Tour revealed the route for the 2016 edition with a solid French accent. With a start in La Manche, next year’s Tour will feature plenty of climbing, with stops in Andorra and Switzerland.
The post Report: Germany in line to host 2017 Tour start appeared first on VeloNews.com.