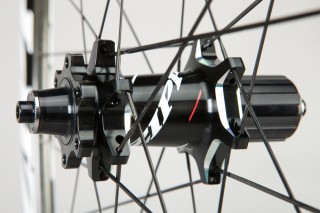 Just the right amount of machining makes the hubs stand out while shaving a few grams in the trade. Photo: Michael Robson
For years, Zipp wheels represented the pinnacle of technical innovation, aerodynamics, and speed. Zipp bravely rode the razor’s edge of tough versus light and, often in conjunction with Hed, produced some of the benchmark designs of 21st century cycling.
Then a funny thing happened: Zipp seemingly sat on its hands while almost every other wheel manufacturer stepped up with disc-brake and thru-axle compatible designs. As recently as late last year — after Jeremy Powers was seen riding what looked like production-ready hubs — we contacted Zipp to see when consumers could expect dedicated disc-brake wheels. They were conspicuously tight-lipped.
It’s apparent now that Zipp has done its homework and is back in the game. Technically, we’re reviewing Zipp’s new 202 disc-brake wheels, but since the rims have changed very little since the Firecrest rim design was introduced, we’re zeroing in on the hubs Zipp has developed for its disc-brake wheelsets.
Officially dubbed the 77D (front) and 177D (rear), these hubs bring Zipp’s offerings up to the minute. At first glance, the hubs look rather elegant, sporting smooth, ramped flanges for the 24 straight-pull Sapim CXray spokes with relief machined edges that add nice, shiny highlights. But no one cares how they look, right? Let’s run through the specs.
As is the fashion now in disc brake hubs, Zipp went with simplicity. Gone are finicky preload adjustments a la the 88/188 hubs. Bearing preload is built into the axle spacing. The disc interface is ISO/6 bolt. Easily serviced with minimal tools, the 77/177 hubs are 10- and 11-speed compatible with either a Shimano/SRAM or Campagnolo freehub body. The ratchet system is also fantastically simple, tried and true: 3 pawls and 36 points of engagement. Nothing earth-shattering, but functional and reliable. Surprisingly, SRAM’s XD Driver freehub body will work, too. This allows for the use of big XD cogs, but since 11-speed MTB derailleurs are not compatible with road levers, some pretty creative solutions might be required to make it all work.
And while we’re on the topic of compatibility, wheels with 77/177D hubs ship with all the hardware for Quick Release setup as well as thru-axle caps for 15x100mm and 12×100 in the front and 12x135mm and 12x142mm in the rear. The caps can be changed out with no tools, but for the rear hub’s drive side, the cassette needs to be removed in order to change the cap. Even servicing the ratchet system technically requires no tools — just pull on the cassette or cassette body and it will pop right off. This is a minor cause for concern, especially for cyclocrossers who change wheels often: the “no tools required” movement has dramatically increased the chance of end caps getting dropped or lost, or parts getting damaged in transit.
After pursuing smaller, lighter, and more failure-prone bearings for years, Zipp has — and not a moment too soon — backtracked to using beefier, more reliable, and readily available 6903 cartridge bearings. The 17mm inner diameter (ID) on these bearings makes a 15mm thru-axle front possible, and in the rear, the same bearings are teamed up with a shaped 12mm ID thru-axle to create a hub that’s light and tough. Obviously, bigger bearings mean more weight, but it’s a negligible 4 grams per bearing. The 77/177D hubs weigh less than the comparable DT Swiss hub. The combination of more durable bearings and end caps that don’t involve any kind of O-ring seal actually help to protect the bearing while letting it drain if exposed to mud and water. Believe it or not, this system works better.
Zipp’s website says these wheels are well suited to dirt roads, back roads, and gravel grinding, and that’s exactly where I put them through their paces. The wheels are laced up with Sapim CX Ray spokes and brass nipples to ensure more durability, and all of Zipp’s carbon rims are made in the USA.
A set of Zipp 202 Firecrest clinchers with 77/177D hubs weigh 1530 grams; they are light where it counts (out at the rim), stiff, and fast. The 32mm deep rims accelerate well and handle crosswinds with aplomb. Sadly, the 202 and 303 Firecrest clinchers are not tubeless-compatible, but the 30 Course rims are, and they’re offered with 77/177D hubs too.
Here’s one final bit of good news: due to unspecified increases in production efficiency, the 202 wheelset has actually gone down in price by over $400. That’s some serious efficiency. It’s not often that high-performance bike components get cheaper.
Suggested retail price: $1,100 front; $1,300 rear.
We like: Simple design, light where it counts, burly bearings.
We don’t like: Not tubeless-compatible.
The scoop: Light, stiff, and fast with a lower price tag is a win.
The post Reviewed: Zipp 202 Firecrest disc-brake wheels appeared first on VeloNews.com.