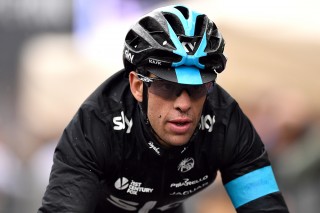 Stage 13 may have been the day that Richie Porte (Sky) gave up hope on contending for the overall in the Giro d'Italia. Photo: Tim De Waele | TDWsport.com
MADONNA DI CAMPIGLIO, Italy (VN) — Richie Porte pushed ahead into the high mountains of the Giro d’Italia on Sunday despite initial doubts due to injuries.
Sky’s Australian captain hit the deck on the wet roads Friday near Venice, and suffering from a sore left hip and knee, lost more than four minutes in Saturday’s individual time trial to overall leader Alberto Contador (Tinkoff-Saxo).
After watching teammate Vasil Kiryienka win the time trial and slurping down a recovery smoothie in silence, Porte expressed doubts about continuing his Giro.
He conceded that his classification hopes were over and that he might even pull out to recover in time for the Tour de France, where he should ride alongside 2013 winner Chris Froome.
But on Sunday he started the 15th stage to Madonna di Campiglio.
“I was prepared for a fight. If anything the last few days made me want to fight harder,” Porte told VeloNews. “It’s just one of those things — as soon as I started the time trial, I could feel the hip and knee. I just couldn’t push my bike.”
Porte sits 17th overall at 8:52 minutes with seven more days to race, including five summit finishes.
After the 59.4km time trial, Porte walked quietly to a hotel where the team set up and showered. He sat and watched Kiryienka win the stage, but did not say much. The silence was appropriate given Porte had aimed to win or at least gain time in the stage to fight for the overall classification. Instead, it went the other way.
“I came in [to the Giro d’Italia] as good a condition as I could, I was motivated as ever, it felt that it was a massive opportunity, but it hasn’t worked out,” said Porte on his way to the team car.
“I know what I need to do physically and mentally to prepare for this race.”
Porte thought back over the two weeks. He said he wished he had not taken the wheel from his friend and rival Simon Clarke (Orica-GreenEdge) on stage 10. The jury docked him two minutes for that illegal assist.
He kept his head up, but it was hard to do so after crashing and losing a further two minutes in Jesolo on Friday.
The blow was felt even harder because this was his Giro d’Italia to win after taking victories in three smaller stage races this year and missing his chance to lead Sky to victory in last year’s grand tours.
On Sunday, Porte continued towards the Madonna di Campiglio summit finish. But quitting is on his mind. He could have a chance to win a stage if his injuries do not hold him back, but if he pulls out, he can rebuild toward the Tour de France start July 4.
“In some ways it might make sense and get out of here and look forward to the Tour,” Porte said.
“It’s massively disappointing. I don’t think I did anything wrong, I’ve just been unlucky.”
The post Richie Porte starts stage 15 of Giro despite lingering aches appeared first on VeloNews.com.