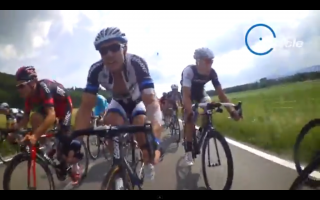 Onboard cameras provided a new dimension to the finishing moments of the stage 5 sprint at the 2014 Tour de Suisse.
Onboard camera footage from inside Sunday’s Ronde van Vlaanderen (Tour of Flanders) will be available to TV rights holders, thanks to a partnership between race organizer Flanders Classics and Velon, an organization dedicated to the improvement of pro cycling.
Five of the 11 Velon teams will have cameras mounted to select rider’s bikes during the race, and footage will be available following the event.
Footage will be distributed by the Velon teams and IMG Media, and will come from Cannondale-Garmin, Giant-Alpecin, Trek Factory Racing, Tinkoff-Saxo, Lotto-Soudal, and Lampre-Merida.
The precise number of cameras in use, and which riders will have them mounted to their bikes, is not yet known.
Similar footage has been recorded and distributed by teams in the past, but this marks the first coordinated effort between Velon teams, and the first close partnership with a large race organizer. The onboard cameras are an important part of Velon’s plan to improve broadcasting, and eventually the revenue streams surrounding TV rights, within professional cycling.
The cameras, most often mounted under a bike’s handlebars facing forward or under the saddle facing backward, offer an unparalleled view into the professional peloton, and will be of particular interest in a dynamic, fast-paced event like Flanders.
“The new technologies give us a fantastic opportunity to show this great race, Flanders’ finest, to even more people around the world — both through our and through the teams’ channels,” said Gilbert Van Fraeyenhoven, managing director of Flanders Classics, in a press release.
The post Ronde van Vlaanderen to feature onboard camera footage appeared first on VeloNews.com.

Velonews: Analysis: The Winners And Losers Of The 99th Ronde Van Vlaanderen

Velonews: Matt Brammeier Wins His Weight In Beer At Ronde