Velonews: Sanne Cant Is Superb In The Sand At World Cup Round 3 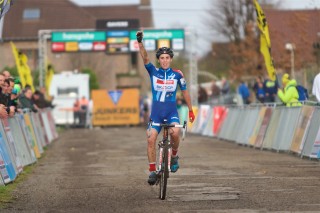 Sanne Cant was the best of the women in Koksijde, taking a big solo win. Photo: Dan Seaton | VeloNews.com (file photo)
Sanne Cant (Enertherm-BKCP) dominated the dunes at Koksijde on Sunday to win the third round of the UCI World Cup and take over the series lead.
With two laps to go in what turned out to be a short race — just 37 minutes — the European champion was crushing it in a light rain on the hilly, sandy 3km circuit. U.S. champion Katie Compton (Trek Factory Racing) was dueling with Nikki Harris (Telenet-Fidea) and Pavla Havlikova (MRM-Avalon) for podium positions, with Sophie De Boer (Parkhotel Valkenburg) in the thick of things as well.
Harris gradually worked her way into second, just ahead of Compton, and fighting to cut the gap to Cant.
But with one lap to go the Belgian powerhouse was solidly away, clearly the strongest in the deep sand, with Harris at 17 seconds, Compton at 38 seconds, and Havlikova just a half-dozen seconds behind her.
In the end, Cant took the win by 12 seconds over Harris while Compton rounded out the podium in third at 42 seconds.
World Cup leader Eva Lechner (Team Colnago-Sudtirol) could manage only ninth on the day, 2:47 down.
As a consequence, Cant now leads the World Cup with 145 points. Lechner slipped to second at 134 with Havlikova third with 85.
Cant said it felt “really good” to win for a second consecutive year and take the World Cup leader’s jersey.
“I didn’t expect it,” she added. “I thought Lechner would be good today, but sand is not her thing, I think. I’m very happy.”
The next round of the World Cup will be December 20 at Namur, Belgium.
The post Sanne Cant is superb in the sand at World Cup round 3 appeared first on VeloNews.com.

Velonews: In The News: Sanne Cant Injured In Collision With Tractor