Velonews: Scott’s New Line-up Of Plus Bikes To Hit The Market In 2016 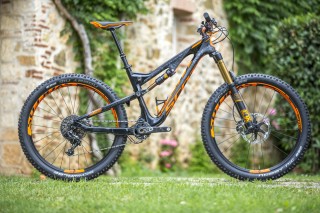 Scott's Genius LT isn't the only model to get the Plus treatment. With wider tires and rims, the Plus bikes are said to increase traction and control. Photo: Scott Bicycles
Scott Bicycles has officially waded into the hotly debated world of tire size with the release of its ‘plus bikes.’ Many of Scott’s most popular models — Scale, Genius, Genius LT, and E-Genius — are getting the plus-size treatment in 2016 with wide, 27.5 x 2.8-inch tires, which Scott says improves traction and control, along with new geometry to accommodate the bigger rubber.
The plus-size tires will run across the 27.5-inch tire platform that, according to Scott, lends itself to the best combination of nimble control and fast rollover when faced with obstacles.
The rims used for the plus bikes are wider than conventional mountain rims, 40mm inner width, which supposedly allows the rider to roll lower tire pressures for increased traction while cornering. Scott also claims that the 2.8-inch Schwalbe Nobby Nic being used on its models increases the tire’s contact patch by 21 percent, compared to a 2.35-inch Nobby Nic. According to its research, Scott also claims the larger tires increase rolling resistance by only one percent, again comparing 2.8- and 2.35-inch Schwalbes with the same tread patterns.
While the plus-size tires are the real attraction, it’s important to note that smaller tire sizes can be used as well. For even more versatility, the 27.5-plus models can accommodate 29-inch wheels and standard-width tires.
The post Scott’s new line-up of plus bikes to hit the market in 2016 appeared first on VeloNews.com.