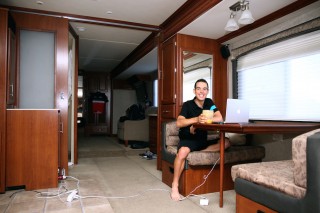 Richie Porte enjoyed comfortable accommodations at the Giro. Now, Team Sky says it will likely bring the camper van to the Tour de France for Chris Froome. Photo: Tim De Waele | TDWsport.com
MILAN (VN) — After completing the Giro d’Italia, Team Sky is planning the next trip for its mobile home, which is likely the Tour de France for captain Chris Froome.
Great Britain’s Team Sky became the first team to use a mobile home instead of hotel rooms for its captain Richie Porte at the Giro d’Italia. Porte slept in the spacious silver vehicle from Sanremo until he pulled out in the third week at Madonna di Campiglio due to a crash.
Froome will likely be next to snuggle into the accommodation when the Tour de France kicks off in Utrecht, Netherlands, on July 4. Of course, he could also make a test run in the Critérium du Dauphiné stage race in France, June 7 to 14. Sky officials had yet to respond about its plans when this article was written.
“The whole point of bringing it here wasn’t for Richie Porte, Richie happened to be the guinea pig,” team principal, David Brailsford explained last week at the Giro d’Italia.
“We are interested in sleep. It’s a big topic in sports science. We’re interested diets related to sleep and other factors related to sleep and recovery.”
Brailsford and his team believe that a rider faces less stress and unknowns, and has guaranteed cleanliness by returning to the same room, or in this case mobile home, each night to sleep. In a three-week race, where every percentage point counts, this could make the difference in winning or losing. Sky calls it marginal gains.
“I can remember what the others called the ‘Dave B. spinning classes’ when we used rollers to warm down after stages. If you’re not willing to be ridiculed, then you’re never going to change anything,” Brailsford added.
“Someone says the earth isn’t flat. They go to the ‘edge’ and discover it’s not flat at all.”
The edge in this case could be the most stressful and important stage race in the world, the Tour de France. If Froome was to tuck in each night in the mobile home, then it would be a first in a race where riders normally retire to the hotels that organizer ASO assigns to their teams.
Sky is studying to make the mobile home debut a reality at the Tour de France. Over the winter, it began considering what the best team in 2020 would look like. Their idea is that it would not be reliant on the race organizer’s sleeping arrangements, which are sometimes low-budget hotels next to the highway.
Porte tested the mobile home in the Giro while at the same time, a team from Sky visited the Mugello MotoGP in Italy to see how top motorcyclists sleep.
“We looked at what they do and how they operate,” Brailsford continued. “When they heard about the way cycling’s reacted to a team using a mobile home, they thought it was just hilarious.”
Brailsford was short on details, but the MotoGP visit could be a way to streamline and improve its mobile home for the Tour de France.
“There are certain things that challenge, little things like the supply of electricity. The hotels mainly expect us to turn up with a bus and a truck. You turn up with more and more vehicles, requiring power, and all of a sudden the kitchen in the hotel starts blacking out because you overloaded the whole system. We have to consider those types of things.
“This is step one of an evaluation. We will see what we learned. Like with any project, we will see what step two will be.”
The post Sky plans next step with mobile home appeared first on VeloNews.com.