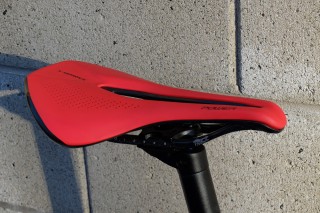 The Specialized Power saddle is designed for road racers and triathletes. It resembles a time trial saddle, with its stubby nose, but the Power saddle is designed for any rider who spends a lot of time in a low position, whether that's in the drops or on the aero bars. Photo: Logan VonBokel | VeloNews.com
Specialized’s line of saddles is getting close to being as large as its line of bicycles. The newest model, the Power saddle, takes design elements from Specialized’s time trial saddle, the Sitero, and Specialized’s popular Phenom saddle.
At first glance, the Power saddle stands out with its wide cutout. Then you sit on it and feel the Power’s extremely stiff carbon shell.
“The Power saddle is made using a new construction that combines carbon and advanced polymers, achieving the stiffness of carbon and the durability of plastic,” Specialized’s Lucas Hartman said.
Hartman went on to claim the Power saddle’s base is 20 percent stronger than other S-Works saddles and is 12 percent stiffer. While I cannot corroborate the claim in regards to strength, as I’ve only ridden the Power saddle for a few hundred miles, I can say it’s the stiffest saddle I’ve ridden. But don’t misconstrue that to mean it’s uncomfortable because it’s not.
Fans of more classically-shaped saddles, such as the Fizik Aliante and Selle San Marco Regal, will likely find the stiffness of the Power off-putting. Those riders’ test rides won’t take them further than the bike shop’s parking lot. The lower-level Expert model uses a less-stiff shell and a little thicker padding than the two higher-end models and it’s also heavier, but riders scared off by the S-Works stiffness might try the less expensive model.
The snub-nose of the Power saddle is another eye-catcher. Hartman said the Power saddle has a nose about 3cm shorter than more traditional saddles. The nose is also at a different angle than the tail end. Specialized recommends to install the saddle so the nose is level with the ground, which will make the tail flare up. When you’re bent down in the drops and pushing on the pedals, the flare in the back keeps your behind planted, rather than sliding backward on the saddle.
I’ve spent about 300 miles on the Power saddle. It’s unlike any other saddle I’ve ever ridden. It’s not a saddle I would opt to ride for a long day of rough roads or in a cyclocross race, but that’s not what’s it’s designed for. It would make for a great option for someone who wants to ride the same saddle on both their road and time trial bikes.
Similarly, I would recommend any road racers who are suffering from numbness in their nether region to give the Power a chance. Specialized claims the Power gives riders the best blood flow of any saddle when they are in aggressive positions, such as in the drops. Whether or not that’s true I couldn’t say, but I can say that I didn’t experience any numbness while riding this saddle on two different road bikes, and I have dealt with numbness with many other saddles.
Now that I’ve put that image in your head, my recommendation: If you’re happy with your saddle, stick with it. But if you suffer from some discomfort, you might want to see if your Specialized dealer is going to have any Power demo saddles to try out.
Suggested retail price: S-Works: $300; Pro: $200; Expert: $130.
We like: Once dialed in, it’s surprisingly comfortable. You can feel the support without numbness after a long day.
We don’t like: Looks pretty silly, but unless you’re in the WorldTour, no one is likely to photograph your saddle before a race.
The scoop: Something different, but in the saddle world, the word “different” is taboo. It’s a great option for the rider who suffers from numbness and is looking for something new.
The post Specialized adds to saddle lineup with Power model appeared first on VeloNews.com.

Velonews: Can Specialized Save You Five Minutes Over 40km?