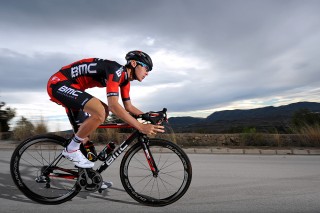 Photo: Tim De Waele | TDWsport.com (File).
BILBAO, Spain — BMC’s Peter Stetina broke his right tibia, patella, and four ribs in a crash near the finish line of Monday’s opening stage of Vuelta al Pais Vasco.
His teammate, Darwin Atapuma, was also among the half-dozen or so riders who were involved in the pile-up about 400 meters from the finish line of the 162.7km race. The crash happened when the middle part of a reduced peloton was passing three-foot-high metal poles topped with orange traffic cones near the curb lane of the finishing straight.
“Some guys barely missed the poles and some clipped them,” Stetina said. “I didn’t even have time to react or pull the brakes. You don’t expect to have fixed obstacles in the middle of a field sprint.”
BMC’s chief medical officer Dr. Max Testa said the normal recovery time from an injury of this type is several months.
“The Amgen Tour of California was my big goal and my GC [general classification] race this year,” Stetina said. “Now it is almost for sure out the window.”
Atapuma was able to get up and ride to the finish after suffering a cut on his left knee. A decision on whether he will be able to take the start for stage 2 will not be made until Tuesday morning, Dr. Testa said.
The post Stetina seriously injured in crash at Pais Vasco appeared first on VeloNews.com.

Velonews: Phinney, Stetina To Return At Tour Of Utah