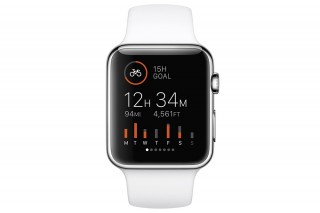 The new Strava application will use a number of Apple Watch's features including "glances," displaying premium member's weekly progress and the percentage completed of their mileage goals. Photo: Strava
At Apple’s Spring Forward launch event on March 9, the Apple Watch was officially unveiled. Strava is one of the select group of third-party developers that will offer applications for the new device.
Its new app will take advantage of the watch’s fitness functions. When the new application update is available, the Apple Watch will allow cyclists to see basic ride and run metrics on their wrists. Results at the end of a ride or run will be instantly summarized and displayed on the watch, and for multi-sport athletes, the watch will allow you to quickly toggle the Strava application between cycling and running.
The most motivating feature of the new app is available only to premium members, and that is the watch’s interaction with real-time segments. As a rider approaches a starred segment, the watch will notify the rider, it will display elapsed time in the starred segment, and will provide instant results.
Premium members will also be able to see their weekly training load and the percentage completed on their weekly goals. This is done using the Apple Watch’s “glances” feature, and we expect this will function even when the app is not open. Users won’t be able to access information when the Strava app is closed. But that may be a feature that gets developed over time.
The Apple Watch, in general, acts as an extension of the iPhone, so Android users are out of luck — at least until the hackers figure out a way around that hurdle — and athletes will still need to carry their phones with them as the Apple Watch does not have its own GPS or cellular hardware.
The Apple Watch has a heart rate monitor built into the back of the face, and while we expect the Strava application to use this and display its data on the watch’s face, along with other information such as power and cadence, Strava public relations spokesperson Brian Holcombe said that would not be a feature at the time of the launch.
Further, the Apple Watch’s basic functions, such allowing the wearer to accept or reject incoming calls, reply quickly to text messages, view the weather forecast, get real-time directions, and see the exact time of the sunset, are all functions that could make a cyclist’s time on the bike better, and hopefully, less distracted.
The Apple Watch will start at $350 for the 38mm-face model, and the larger, 42mm-face model will sell for $400. The watches will be available April 24.
The post Strava launches Apple Watch application appeared first on VeloNews.com.