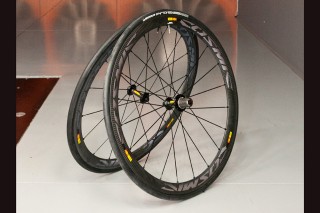 Mavic's Cosmic Carbone 40 clincher wheelset is a durable, versatile option for riders who want a trouble-free setup for daily riding and more. Photo: Brad Kaminski | VeloNews.com
When we tested the Mavic Cosmic Carbone 40 wheels for the September 2014 issue of Velo magazine, they didn’t do all that well.
In fact, they got beat out by a number of competitors, both in the wind tunnel and on the road. But we didn’t stop riding them. In fact, we ended up putting in more than 2,500 miles on the CC40 to date. And in spite of our VeloLab test, we really grew to like these carbon clinchers.
The CC40 was unveiled about two years ago as an antidote to the woes that carbon clinchers have suffered over the years. The carbon rims actually sport an aluminum skeleton that acts as a heat sink, effectively keeping the rims from overheating.
Right off the bat, the braking performance was noticeably good with these new rims. VeloNews’ Caley Fretz rode the wheels at Mavic’s product launch two years ago in Nice, France, and said they were among the best carbon clinchers he ever had the pleasure of stopping on. There was no heat-induced fade. Power was acceptable, and decreased only very slightly as he ran through water on the way down the Col de la Madone.
On our home roads in mountainous Colorado, we could always rely on the CC40s under heavy braking. Power rarely faded, even on long descents. Modulation was good, although occasionally a bit grabby. And though the yellow Mavic pads, made by SwissStop, would sometimes squeal on the initial application of the brakes, they were generally quiet.
The only cause for concern was a very wet and rainy ride, which markedly reduced braking power.
Another noticeable feature of these 40mm-deep rims is their narrow width. When it comes to pure speed in a block headwind, this can be an advantage, as it results in a narrower tire profile. Indeed, our wind-tunnel tests bore that out. The Mavics ran with the best in Velo’s November test.
If you’re racing crits on 25mm tires, width and compliance are probably not primary concerns.
However, a 28mm Clement Strada LGG ends up measuring 25mm on these wheels, which can diminish the intended effect of wider tires.
On the flipside, if your bike’s tire clearance is limited, these wheels actually offer a creative way to fit a higher-volume tire. Yes, its shape will be more rounded, but you’ll still enjoy some of the benefits of larger rubber.
Mavic also deserves credit for its hubs, which were trouble-free and only came loose during the very early miles of break-in. The freehub ratchets should be cleaned and lubed periodically, but this can be easily done with a 17mm spanner and a 5mm allen wrench. We did replace the non-drive bearing on the rear wheel after it started to feel gritty, about 2,000 miles into the test.
In terms of ride quality, the CC40s offer plenty of stiffness, which was reliably solid when driving through tight, late-apex corners, choppy roads, and town-line sprints.
Naturally, a moderately deep carbon-rim wheelset isn’t going to be the lightest option on the market, but the 1,558g Mavics accelerated capably, and are merely 26 grams heavier than the Zipp 303, which was our editors’ pick in the 2014 test.
So, why are we still riding these wheels, the wheels that cost $50 more than the 303s, which beat them in the wind tunnel?
In a word, durability. The CC40s have been bombproof throughout thousands of miles of riding. Some of those miles were on smooth tarmac in Napa Valley. Others were on the rough roads that define Southern Louisiana’s 103-mile Rouge Roubaix race. We’ve never had to true these wheels. The bearings are fine. And with the occasional dose of lube, the freewheel has been light and quiet.
There’s a strong argument to be made by the A2 wind tunnel, where the CC40 was tested.
But for the everyday rider, there’s a stronger case for the wheelset that is ready to go any day of the week, for the wheels that are just as capable of a harrowing mountain descent as they are a local criterium, for the wheels that just plain look good, with matte logos on a deep carbon rim.
Price: $2,750
Weight: 1,558g
We like: Reliable and confident braking, ample stiffness, impressive durability.
We don’t like: Narrow rim, braking power decreases in wet conditions, not as aerodynamic as competitors.
The bottom line: For big riders, or those who ride more aggressively, the Mavic CC40’s durability and braking power might be just the ticket to get you riding a set of carbon clincher wheels.
The post Stress Test: Mavic Cosmic Carbone 40 clincher wheelset appeared first on VeloNews.com.