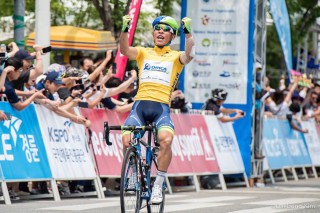 With just one stage left in the 2015 Tour de Korea, Caleb Ewan has an eight-second GC lead after another victory in stage 7. Photo: Daebong Kim
DAEJEON, South Korea (VN) — Caleb Ewan’s already successful trip to Korea was made a little sweeter with a surprise visit from his parents prior to his stage 7 win on Saturday.
The win marks his fourth of the race and the ninth of his debut season with WorldTour squad Orica-GreenEdge – four more than the team’s sports director Matt White had targeted for 2015.
The 20-year-old neo-pro received a text message late Friday evening from his mother, Kassandra, that both she and his father, Ray, had arrived to watch him ride for two more stage wins and defend his general classification lead.
“Mum messaged me last night and told me she was here,” an exuberant Ewan told VeloNews while pointing to his family in the crowd holding ‘Go Caleb’ signs. “I saw them after the finish and it made it even more special knowing my mum and dad are here – that’s really nice.”
After a frantic first hour of racing on the short 145.8-kilometer stage from Gunsan to Daejeon, a break of four riders managed to escape and create a gap of up to five and a half minutes before the peloton began pursuit and reeled in them with less than 15km remaining. Like all six stages prior, the day resulted in a bunch sprint – with only a 65km city circuit remaining on Sunday.
“We were right at the front with 70 kilometers to go,” said the 2014 under-23 road worlds silver medallist. “The boys did an awesome job and they were so strong. It was down to Leigh [Howard], [Adam] Blythe, and Mitch [Docker], and in the last 4k Leigh did a really good job keeping us in a good position and doing a massive pull from the corner of the hill and down to under 1k to go, as did Mitch.
“Blythe took me in next to Drapac as they were dragging us in to the corner and then Wouter Wippert (who finished third) slotted in on Blythe’s wheel which was perfect for me and then I could step off pretty easily.”
For Ewan’s Korean-born mother, Kassandra, and Australian-born father, Mark, the penultimate stage win was an ideal family reunion.
“Caleb’s had a great tour this week,” said Mark Ewan, himself a former cyclist. “He came here with an expectation for a stage win and never really the general classification.
“When it got to Wednesday and he was in yellow, we thought he could hold on for the rest of the week and decided to come over and watch the finish in hopes that he would finish in yellow. If he hangs on to GC, this would be his biggest race of the year as far as a win goes.”
The young Ewan makes his home in Monaco during the season and has admittedly struggled with the move to Europe in the first quarter of the calendar. But his mother says is happily settled now and is doing fine – although he could call home more.
“We don’t get a chance to talk as often as I would like,” said Kassandra, who left Korea with her family at age 10. “But we chat each week on Skype, Twitter, or Viber. We were worried about him being isolated, but we supported him with the move.
“Simon Gerrans and the boys have been like big brothers, and encourage him on and off the bike.”
With an eight-second lead over nearest rival and stage 7 runner-up Patrick Bevin of the Avanti Racing Team, Ewan is mathematically still under threat on GC, but with the strength of his Orica-GreenEdge squad, he is a heavy favorite to claim the overall win.
“Sometimes I think we all forget he’s just 20 years of age,” Mark Ewan explained to VeloNews. “I think as he matures and gets stronger, there’s some potential there as a tour GC rider – maybe not a grand tour, but some of the smaller tours for sure.
“This race is a perfect example of what he’s capable of achieving, but we still have to get through one more stage.”
Aaron S. Lee is a cycling and triathlon columnist for Eurosport and a guest contributor to VeloNews.
The post Surprise family visit spurs Ewan to another win in Tour de Korea stage 7 appeared first on VeloNews.com.