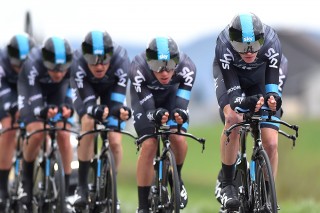 Photo: Tim De Waele | TDWsport.com (File).
Team Sky and the Optum-Kelly Benefit Strategies women’s squad both crashed during team time trial practice on Saturday, a day before the main event at the world championships in Richmond, Virginia.
Three of Sky’s riders hit the deck at nearly 60kph. Danny Pate, Luke Rowe, and Italian sprinter Elia Viviani, who is on the list of favorites for next weekend’s road race title, all went down, while Vasil Kyrienka, Salvatore Puccio, and Ian Stannard stayed upright.

Five of Optum’s six women crashed after hitting a sunken manhole as they were passing another team stopped on the side of the road with a mechanical. Annie Ewart was taken to the hospital, where she was confirmed to have a broken collarbone. Maura Kinsella suffered a concussion and is unlikely to start Sunday.
“Annie has a broken collarbone and will not start. Maura has a concussion and likely will not start. Everyone else is pretty beat up,” Optum director Pat McCarty confirmed via email to VeloNews.
“We were approaching a critical left turn in the last 5km of the course. There was some confusion with a mechanical for one of the other teams and quite a few police officers stopped to direct the race traffic,” McCarty said. “We were at race pace for the corner, so once we got around the police and cars I think they were looking directly to the corner and completely missed the manhole cover, which was unmarked and rather deep.”
Much of the Richmond course has been repaved, and it appears that both crashes were caused by manhole covers, not potholes or other artifacts of an old, poor road surface.
Despite the setback, McCarty believes the team may be able to take the start on Sunday. “I would like us to make an effort for tomorrow,” he said.

We have @annieewart @MauraKinsella @amymcharity in the medical tent being checked for concussions. Annie to hospital for shoulder X-ray.
&mdash; Optum Pro Cycling (@OPTUMpbKBS) September 19, 2015
Click to expand...

Optum placed fourth in the team time trial last year, just six seconds off of the podium.
“For us this is a huge blow to the work all our ladies have put into the TTT this year, and especially the last ten days here in Richmond,” McCarty said. “We were on target to do the best performance possible for our women’s team, so to know that is now not possible is pretty tough. The ladies will do their best to make a valiant showing and I know they will impress, one way or the other.”
This story is developing, check back for more.
The post Team Sky, Optum women’s squad crash at worlds TTT practice appeared first on VeloNews.com.