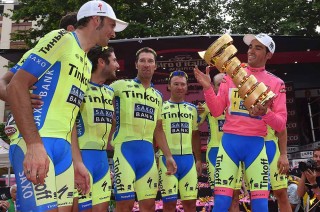 Oleg Tinkov's team won't have Saxo Bank in its name or on its kit next season. Photo: Tim De Waele | TDWsport.com
MILAN (VN) — Tinkoff-Saxo will have to look elsewhere to fund its super-team with Alberto Contador and Peter Sagan. Danish investment bank Saxo Bank pulled its sponsorship Thursday morning after eight seasons.
Saxo Bank’s sponsorship contract expired this 2015 season. There were reports that it might continue with Russian Oleg Tinkov’s team, but that possibility is over.

After 8 fantastic seasons, we announce that @Saxobank’s sponsorship of @Tinkoff_Saxo ends at the end of the season. pic.twitter.com/9mSheN21ek
— Saxo Bank (@saxobank) October 15, 2015

Thank you to both the current @Tinkoff_Saxo team and heroes of the past whose passion has boosted our brand globally. pic.twitter.com/6gg6xYhSXj
— Saxo Bank (@saxobank) October 15, 2015

Dane Bjarne Riis brought Saxo Bank to his CSC team as a co-title sponsor in 2008. It supported Fabian Cancellara to one-day classic wins and Carlos Sastre to the 2008 Tour de France overall title. This year, Contador won the Giro d’Italia, while Rafal Majka and Peter Sagan won stages in the Tour de France and Vuelta a Espana. Sagan went on to win the world championships road race in Slovakia’s colors.
The Tinkoff/Saxo split looked likely, however, when Tinkov fired Riis this spring.
Tinkov had bought the team from the 1996 Tour de France winner in December 2013 for around $8 million, but fell out with him this spring. Officially, they “mutually terminated” the contract. Tinkov’s team used the same polite wording when it jettisoned coaches Bobby Julich and Dan Healey.
The brash Tinkov, who insulted U.S. President Barack Obama in July, said this summer he does not need a co-sponsor to continue. But in the Vuelta, he was trying to sort out a deal to continue the agreement.
What is true is that the value of Russia’s ruble has plummeted over the last year. One U.S. dollar used to buy you 36 rubles, now it exchanges for around double that. It has created questions about how Tinkov can afford to pay for his riders’ salaries.
Contador signed with the team for around $5 million a year in 2010. Sagan joined last winter on a three-year deal, through 2017, at a reported $4.5 million annually.
“Why would I suffer? What you see in the news is propaganda, don’t forget,” Tinkov said in February.
“Russia suffers but not the way that the West would like to see it suffer. I know you’d like us to suffer more, the British and Americans like to push the Russians, it’s geo-political, it’s normal. You have been doing that for ages, but don’t worry, we won’t suffer like you want us to suffer. We are still OK.”
However, reports swirl in Denmark that Riis may try to buy back his former team. Tinkov denied the report last week at the Abu Dhabi Tour, but said he would sell the team if he could make money on the deal.
Given Tinkov’s sometimes absurd messages on Twitter, it is hard to know when to take him seriously or not. What is certain is that Saxo Bank is no longer standing by his side.
The post Tinkoff loses Saxo Bank sponsorship appeared first on VeloNews.com.