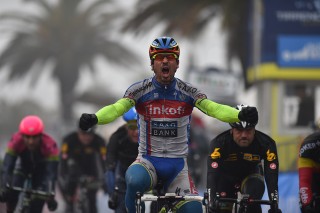 Peter Sagan's win at Tirreno-Adriatico was just what the young rider needed to revive his confidence. On Sunday, he'll face a much greater challenge at Milano-Sanremo. Photo: Tim De Waele | TDWsport.com
Peter Sagan got the monkey off his back in Tirreno-Adriatico, winning a wet and cold stage 6 on Monday. Now, his Tinkoff-Saxo team looks to the Slovak national champion to deliver again, this time at Milano-Sanremo, the season’s first monument race, Sunday in Italy.
“I’m heading to Milano-Sanremo to deliver a top result just like at any other race. When the team or I start a race, the ultimate goal is to win. But in cycling you never know, and you have to be realistic,” said Sagan in a team statement. “My competitors have the same goals, and sometimes you win and sometimes you don’t. But Milano-Sanremo is special, and I’ll naturally be at the start with big ambitions.”
Alongside Sagan, Matti Breschel, Daniele Bennati, Roman Kreuziger, Maciej Bodnar, Christopher Juul-Jensen, Manuele Boaro, and Matteo Tosatto will line up for the Russian team to tackle the 293-kilometer race.
After breaking a nine-month drought without a win (aside from Slovakia’s national road championships), Sagan has been taciturn, a shadow of his former self, a rider known for clowning around as he crossed the line to handily win races during his 2012 glory days.
“It’s difficult to point out a favorite,” Sagan continued, speaking of Milano-Sanremo. “In the last three years, we haven’t seen the favorites taking the victory and instead it has been outsiders, who crossed the finish line first. It’s a special and unpredictable race due to many factors, such as the length of the race and the tactical situations. All I can do is to try my best knowing that I’m backed by a strong and motivated team.”
He placed fourth at Milano-Sanremo in 2012 and was second in 2013. Last year, he could only manage a 10th-place finish.
Now, aboard a new team for 2015 — one which reportedly gave him a three-year, $12 million contract — Sagan is expected to pull out of the slump that saw him close out 2014 with disappointing results.
“With Peter Sagan as our leader, we clearly are one of the favorite teams. Milano-Sanremo is a distinct race to win, and there will be many of the big names at the start all hoping to finish first, so it will not be very easy,” said sport director Bruno Cenghialta, perhaps trying to temper expectations in a team press statement.
“A key point is the Cipressa, where we will have to be in the front and handle the climb attentively — it’s here the first attacks take place.
“There is a segment of 7-8km between Il Poggio, the descent and the finish, where the race is nearly always decided,” Cenghialta continued. “The final stretch is extremely important, and it will be crucial to correctly manage every single meter in order to set up Peter Sagan.”
At Tirreno on Monday, Tinkoff-Saxo showed they could rally behind their star to deliver him to the finish first. Now, the question remains: Can Sagan hold up his end of the bargain come Sunday?
The post Tinkoff-Saxo builds Sanremo team around Sagan appeared first on VeloNews.com.