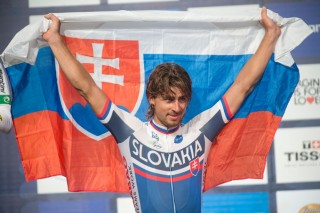 Peter Sagan displayed his country's colors after winning the rainbow jersey. Photo: Casey B. Gibson | www.cbgphoto.com
MILAN (VN) — Russian multi-millionaire and Tinkoff-Saxo team owner Oleg Tinkov is at peace with his star rider Peter Sagan following a turbulent season.
The Slovakian Sagan won the road race at the UCI Road World Championships Sunday in Richmond, Virginia in solo fashion. Tinkov, who had complained about a lack of results and an over-valued contract, simply congratulated his star.
“Peter is the beast! Cycling without him would be different!” Tinkov said in a Tinkoff-Saxo press release.
Tinkov also reacted to Sagan’s win on Twitter following the race.

Tinkoff sport director Steven de Jongh and general manager Stefano Feltrin spoke at greater length about Sagan in the Monday press release. Tinkov’s praise was limited, but after a rough start to the 2015 season, it could be viewed as an olive branch between the flamboyant Russian and the talented Sagan.
Tinkoff caused the biggest transfer wave over the 2014/2015 off-season when he signed Sagan to a three-year contract through 2017, at a reported $4.5 million per year.
Few other cyclists in the sport earn so much. Alberto Conador, Tinkov’s other star, signed with the team for about $5 million per year beginning in 2011. Italian Vincenzo Nibali has a contract with Astana worth a reported $4.4 million per year.
Sagan could have been worth the big-money contract given his rocket-like rise in cycling. He won stages and points jerseys in nearly every stage race since he began racing with Liquigas/Cannondale in 2010. This year, he won his fourth consecutive green jersey at the Tour de France.
His strength in sprints and ability to blast up small climbs, which netted him the rainbow jersey in Richmond, helped him to the top of the classics as well. He won Gent-Wevelgem and Brabantse Pijl in 2013, and last year he won E3 Harelbeke. Also in 2013, at the age of 23, Sagan placed second in Milano-Sanremo and the Ronde van Vlaanderen (Tour of Flanders).
Sagan netted only one classics win in 2014 — at E3 Harelbeke — but Tinkov made sure Sagan would join his neon yellow and white team for 2015. After a difficult spring, however, Tinkov’s confidence appeared to wane. He vowed to spend less money when signing new riders.
“I have to be wise not to do crazy things like I did with Peter Sagan one year ago,” Tinkov said in June.
“I was new, I have to admit, but my strength is that I admit my mistakes. I try to analyze and not repeat them.”
Tinkov said after the classics that he “can’t be happy” with Sagan’s fourth-place finishes in Milano-Sanremo and the Tour of Flanders and that if he could, he would cut Sagan’s salary.
Tinkov rocked the boat this season. He fired team founder and team manager Bjarne Riis during the spring classics. He failed to give a clear explanation, but the next day, he lampooned Riis for living in the dark ages of cycling. After the summer, he fell out with coaches Bobby Julich and Daniel Healey. The team explained the two mutually agreed to leave.
Contador’s Giro d’Italia win and Sagan’s return to form helped steer the ship back on course. Sagan returned to win the Amgen Tour of California, a third green jersey at the Tour, and a Vuelta a España stage before traveling to the U.S. The worlds win, considered a classic, created a sense of calm heading toward 2016.
The team’s future could hinge on Sagan. He is only one of three riders alongside Rafal Majka and his brother Juraj Sagan with a contract into 2017. Tinkov already said that with the failing Russian economy he might have to tighten his belt for 2016. At least now Tinkov has a rainbow jersey in house courtesy of his “beast” Sagan.
The post Tinkov on Sagan’s worlds win: ‘Peter is the beast!’ appeared first on VeloNews.com.