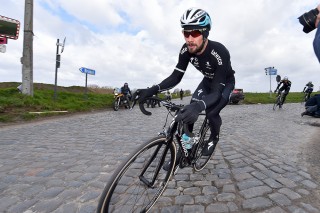 Photo: Tim De Waele | TDWsport.com (File).
Tom Boonen is a fixture on the Belgian Etixx-Quick-Step squad, having ridden with the formation since it was launched in 2003, and on Tuesday, the team announced he will stay on board for 2016 as well.
“I am very happy to stay with the team for another year,” Boonen said. “It wasn’t difficult to reach an agreement with Patrick [Lefevere]. I spent almost my entire professional career here. It’s nice to have this extra opportunity to go ahead for another year. I think I still have some business to do as a rider in cycling, and I am proud to do it again with my team, which is more than a team to me.”
At 34 years old, Boonen has one of the most enviable palmares of any active professional. He won Paris-Roubaix four times, owns three victories apiece at Gent-Wevelgem, Kuurne-Brussels-Kuurne, and Tour of Flanders. The Belgian is also a former world champion and winner of the points classification at the 2007 Tour de France. In sum, he has more than 100 professional victories to his name.
Boonen’s 2015 spring season was derailed by a dislocated AC joint suffered in stage 1 of Paris-Nice. He’s made it clear that he wants another chance to chase victory on his beloved Belgian cobblestones in the twilight of his career.
“I still have a lot of things I’d like to accomplish before my career ends,” Boonen continued. “It’s not only a question of personal goals, but at my age, it’s also nice to be able to teach something to the young guys. I want to pass on my experience, to help them understand even the small details of the sport, which is one of the best sports in the world. I feel that I still have plenty left to contribute, both to the team in general, as well as my personal performance.”
The post Tom Boonen signs with Etixx for 2016 appeared first on VeloNews.com.

Velonews: Tom Boonen Wants Another Crack At The Classics On His Terms