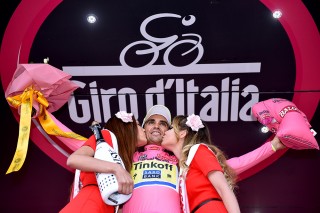 Alberto Contador moved into the overall lead on stage 5 of the Giro d'Italia. Photo: Tim De Waele | TDWsport.com
ABETONE, Italy (VN) — New Giro d’Italia leader Alberto Contador (Tinkoff-Saxo) couldn’t make it plainer. He was all but begging; someone please take the pink jersey.
Contador rode into in pink in the stage 5 mountaintop finale, but he certainly doesn’t plan on holding it all the way to Milano, still more than two weeks away.
Why? He doesn’t want to burn out his team, and maybe he doesn’t want to have to answer the same inane questions from the Giro press corps every day for another two weeks.
“If someone takes it tomorrow, that’s fine,” Contador said Wednesday. “The most important thing is to have it on the final day in Milano. That’s what our goal is, not to ride it all the way to the finish.”
Orica-GreenEdge’s four-day run in pink ended when Contador attacked out of the lead group about 5km to go from the finish line at Abetone.
Now that Contador has the jersey, he would like to give it away. Certainly not to rivals Fabio Aru (Astana), just two seconds back, or Richie Porte (Sky), but just about anyone else would be just fine.
“It would almost be better to let someone else take the jersey,” Contador said. “When you are pink, after each stage, there are so many protocols and commitments, that you have less time to rest.”
There are two transition stages that could help Contador’s wish come true. Breakaways will be playing their luck, especially with Contador giving the signal that Tinkoff-Saxo won’t be chasing down the escapes. With the green light for pink, more than a few teams will be riding for the breakaway.
Thursday’s 183km sixth stage could go either way. It starts flat, and ends flat, so it could be one for the sprinters, which means Contador would keep pink. But the stage gets quite lumpy in the middle, with 70km of undulating country that could give wings to a committed breakaway. And it depends on which sprinter teams are willing to pull. Sky certainly won’t be wasting energy to set up points leader Elia Viviani, so it would be up to Lotto-Soudal, Trek Factory Racing, and Lampre-Merida to lead the chase.
Friday’s monster 264km, the longest (and likely most boring) stage of this year’s Giro, will more likely see a breakaway stay clear, and with it, Contador’s pink jersey. Interminable flats and mid-stage rollers will see a breakaway take big time. The GC favorites will want to keep any big breakaway on a short leash, but the stage ends with an uphill finale, so teams will be putting their top stage-hunters on the march.
Saturday’s 186km eighth stage is next major hurdle for the GC riders, but much like Wednesday, the stage could be a battle on two fronts. The overall contenders will save their matches for the final climb up the Cat. 1 Campitello Matese summit, but determined stage-hunters might be able to fend off the favored climbers. The stage is hard enough that the GC riders will be riding full gas, so it could be difficult for a breakaway to stay clear. More likely will be non-threatening climbers to open up long-distance attacks out of the front group.
In any scenario, Contador and the other GC favorites would not want to see anyone with legitimate overall credentials to take significant time. They wouldn’t want someone like 2012 Giro winner Ryder Hesjedal (Cannondale-Garmin), for example, who now languishes more than six minutes in arrears, to ride back into the race.
The next few days will give teams who haven’t been able to gorge on the Giro pie a chance to have their slice of the action.
One team that will be on the attack is Gianni Savio’s Androni-Spidermec team. The squad had one of its riders in a breakaway Wednesday, and Savio promises more in the coming days.
“I come with a plan like football, with a 6-1-2 attack. Two sprinters, one GC rider in [Franco] Pellizotti, and the other six will be attacking,” Savio said. “I have six riders who try to get into the breakaway every day. It’s not easy to get into the breakaway. It’s a big battle. My riders know these next few days will be a good chance.”
One of Savio’s riders in pink would be ideal for the GC contenders.
The post Too early: Contador ready to gift pink jersey appeared first on VeloNews.com.

Velonews: Is Astana Burning Its Giro Matches Too Soon?

Velonews: Knaven’s Roubaix Winner: A Bike Too Good To Wash

Thursday's EuroFile: No Tour for Zabel; Freire off in July, too (VeloNews)