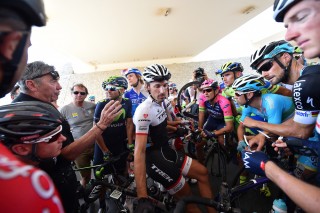 Eddy Merckx talked with riders when a sandstorm bought stage 5 at the 2015 Tour of Oman to a halt. Photo: Tim De Waele | TDWsport.com
MILAN (VN) — Forget two of cycling’s stars, Fabian Cancellara and Tom Boonen, arguing with the legendary Eddy Merckx over a sandstorm and extreme heat last February in the Middle East. The reason many teams are skipping this year’s Tours of Qatar and Oman has to do not with disagreements but, instead, with the duration of those races.
Merckx co-owns the races and runs them with the help of Tour de France organizer ASO. When the list of teams racing the 2016 edition of the Tour of Qatar came out on Tuesday, it was missing top WorldTeams Trek Factory Racing, Etixx-Quick-Step, Tinkoff, Sky, Orica-GreenEdge, and Movistar. The list of teams scheduled to race the Tour of Oman, which came out on Wednesday, looked very similar, save for the addition of Etixx.
It appeared odd, given the fact that teams often said the Tour of Qatar with its high speeds, heat, and cross-winds provided ideal preparation for the classics in the following months. Stranger still, classics-strong team Etixx counts eight victories in Qatar’s 13 editions, including titles from the last four years.
“We are doing a little bit different calendar this year,” an Etixx spokesman told VeloNews. “For the riders that are going to the classics, some of them will race at Valencia. Sometimes you need to make changes in the calendar.”
Instead of racing the Tour of Qatar (February 8-12) and the Tour of Oman (February 17-22), teams will keep busy with the Volta a la Comunitat Valenciana, Volta ao Algarve, and the Ruta del Sol stage races in Spain and Portugal.
Having the top teams and their stars is a plus for struggling European races. The move away from the Middle East could stem from the spat between teams and organizers on the second-to-last day of the Tour of Oman.
With a sandstorm sweeping through, the organizer delayed the start time and moved the location to Muscat. Extreme heat, however, caused some teams’ tires to explode on a decent in the naturalized zone. Riders, including Boonen and Cancellara, led a protest and argued with Merckx to annul the stage. Merckx later explained, “It could cause problems. [The local organizers] are very angry with a few riders and some teams may not be invited back.”
“It’s a little complicated,” Trek general manager Luca Guercilena said of his team’s decision not to race in Qatar and Oman next season. “We were criticized last year because of the conditions, which the teams and riders could do nothing about. So we decided to create an alternative program in February.
“A lot of it hinged on Oman. We knew we weren’t going there with the sandstorm and traveling last year, so we could not split the team and just send one to Qatar. So we said ‘no’ when ASO asked us.”
Said Tinkoff sport director Steven De Jongh: “Qatar is a good leadup to the classics, yes, but we are required to send the same men to Oman as well. Or we have to pay for flights for men to leave and others to come in. [Team owner] Oleg Tinkov is already spending a lot of money.
“With Qatar and then Oman, it just becomes a long trip. Oman didn’t bring what we wanted last year with the long days to and from the stages.”
Sky’s classics director Servais Knaven said his team’s choice to skip the Middle East races came down to numbers.
“It had nothing to do with [last year’s controversy], we didn’t even talk about that,” Knaven said. “It’s a coincidence that Etixx is not racing as well. We just didn’t have enough men for a cross-winds team in Qatar. Then if we send one there, where it is a good classics preparation, they are required to race in Oman, and that’s not ideal.”
Next season, stars like Boonen, Cancellara, world champion Peter Sagan of Tinkoff, and Sky’s Ian Stannard must not only try different races leading up to the spring classics, but deal with the end of the European winter as well.
“Will Peter be handicapped because of missing Qatar?” asked De Jongh. “No. Not at all.”
The post Top teams to skip Tours of Qatar, Oman in 2016 appeared first on VeloNews.com.