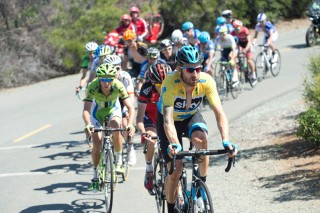 Bradley Wiggins will return to the Amgen Tour of California in 2016 after winning the weeklong race in 2014. Photo: Casey B. Gibson | www.cbgphoto.com
The 2016 Amgen Tour of California announced its host cities on Thursday. The 11-year-old event will kick off this spring in the heart of San Diego — a first for the race — and conclude in Sacramento, which is also the first time the state capital will host the overall race finish. The men’s race will cover nearly 800 miles of California terrain from May 15-22. The women’s race will run May 19-22, and is part of the new UCI Women’s WorldTour.
Another big piece of news out of the Amgen camp is that 2014 Tour of California champion Bradley Wiggins will return to the race in 2016. “The Amgen Tour of California brings the perfect combination of stellar competition, amazing scenery, and superior organization,” said Wiggins. “I look forward to returning to the Amgen Tour of California with Team Wiggins to once again take on the top competitors in the sport.” Wiggins is the current world hour record holder and winner of the 2012 Tour de France.
Though the final details of the eight stages have yet to be announced, the race could favor Wiggins again. It includes the Folsom individual time trial in stage 6, which the Brit won on his way to his overall victory two years ago. In an interesting twist, the race for the women on that same day in Folsom will be a team time trial. Trixi Worrack won last year’s women’s race, but it’s unclear if she has signed with a team for 2016.
Stage 1 – San Diego, May 15
The Amgen Tour of California has entered North San Diego County twice before, but for the first time, the race will reach the heart of the city with stage 1’s start and finish on the water near Mission Bay and downtown San Diego.
Stage 2 – South Pasadena to Santa Clarita, May 16
Stage 2 will begin in first-time host city South Pasadena, with much of the race contested in the Angeles National Forest, ending with the stage conclusion in Santa Clarita. Of the 2016 lineup, Santa Clarita has the distinction of having hosted the most stages (11).
Stage 3 – Thousand Oaks to Santa Barbara County, May 17
As well as serving as a popular training ground for professional and weekend cyclists alike, Thousand Oaks is home to biotechnology company Amgen, the race’s title sponsor since its inception. The day will conclude with a thrilling, first-time mountaintop finish at Gibraltar Road that has been 11 years in the making (road conditions precluded the finish until this year).
Stage 4 – Morro Bay to Monterey County, May 18
Racing on Highway 1 south to north, this stage will highlight two first-time hosts this year: Morro Bay and Monterey County. The stage’s technical conclusion will be at a venue known for speed — the Laguna Seca Recreation Area, host to auto and motorcycle racing at the highest level, as well as the Sea Otter Classic.
Stage 5 – Lodi to South Lake Tahoe, May 19
From Thursday onward, the four-day women’s race will run in conjunction with the men’s, including the same start and finish cities except for this day, when the women begin and end in South Lake Tahoe. Lodi welcomed the 2015 Amgen Tour of California and is back for a second round with a men’s stage start this year. South Lake Tahoe hosted a successful two days of the Amgen Tour of California Women’s Race last year, and this will be the first of the four-day women’s race. Featuring a long day of climbing, the stage will reach the highest elevation ever mounted by the race, 8,600 feet.
Stage 6 – Folsom individual time trial and women’s team time trial, May 20
The men’s individual time trial returns to Folsom where Team Sky’s Bradley Wiggins dominated en route to his 2014 overall Amgen Tour of California victory. The women will compete in a team time trial on the same course.
Stage 7 – Santa Rosa, May 21
In 2006, record crowds flooded downtown to watch the race roar into Santa Rosa for a spectacular finish. This year’s stage will incorporate a portion of the popular Levi’s GranFondo, with the men and women competing on different courses.
Stage 8 – Sacramento, May 22
As an eight-time host, Sacramento has seen some of the most exciting stages and race moments, and will up the ante for 2016 with the grand finale of both the men’s and women’s races for the first time.
“With one of the longer courses in race history packed with iconic and fan-favorite locations, the highest caliber of racing on U.S. soil, and four days of women’s racing, the worldwide audience the Amgen Tour of California continues to attract has something special to look forward to with the 2016 edition,” said Kristin Klein, president of the Amgen Tour of California and executive vice president of AEG Sports.
The post Tour of California names host cities; Wiggins to race appeared first on VeloNews.com.