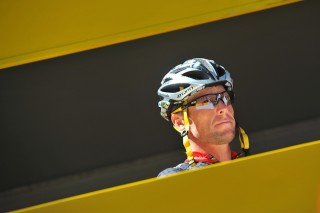 Much is at stake for the U.S. government in the case against Lance Armstrong. The ferocious legal wrangling behind the scenes indicates as much. Photo: Tim De Waele | TDWsport.com (File).
WASHINGTON (AFP) — The U.S. government has successfully blocked Floyd Landis’ proposed settlement with associates of feuding former teammate Lance Armstrong; a federal judge nixed the $600,000 deal on Thursday.
U.S. District Judge Christopher R. Cooper acknowledged that it “might seem unfair” for the government to force Landis to continue litigation against William Stapleton, Armstrong’s former agent and president of Capital Sports and Entertainment Holdings, Inc., and CSE vice president Barton Knaggs, since the government was not part of the court action against them.
But the Justice Department did join Landis in a False Claims Act lawsuit against Armstrong himself, claiming that the US Postal Service was defrauded of tens of millions of dollars sponsoring Armstrong’s Tour de France winning teams, now discredited since the Texan’s banishment from the sport for doping and belated admission of guilt.
Cooper agreed that the government had the right to veto a privately negotiated settlement of public claims, and indeed that power “is a critical aspect of the government’s ability to protect the public” in “whistleblower” suits such as that brought by Landis.
The judge rejected the claim by Stapleton and Knaggs that the Justice Department was required to offer an explanation for its failure to consent to the settlement.
He denied their motion for approval of the settlement, which was originally reached between the parties in December.
Under the deal, Stapleton and Knaggs agreed to a payment of $500,000 to the U.S. government, along with $100,000 to Landis’s attorney.
In February, Justice Department lawyers filed papers with the court saying they were “not in a position to consent” to the settlement.
Lawyers for Stapleton and Knaggs in March accused the government of holding the lawsuit “hostage.”
“While it might seem counterintuitive that the government can effectively veto a settlement of claims it has chosen not to join, the False Claims Act itself and the majority of circuits that have addressed the question say otherwise,” Cooper ruled.
Landis, himself a professional rider who was stripped of the 2006 Tour de France title, brought his original case against Armstrong and his associates in 2010.
The U.S. government joined the action against Armstrong in 2013, a month after Armstrong publicly admitted doping for the first time in a television interview with Oprah Winfrey.
Under whistleblower laws, Landis would receive a portion of the damages if the case against Armstrong is successful.
With potential triple damages to be recovered under the False Claims Act, Armstrong could be hit for $120 million if he loses the case.
The post U.S. government blocks Armstrong-Landis settlement appeared first on VeloNews.com.