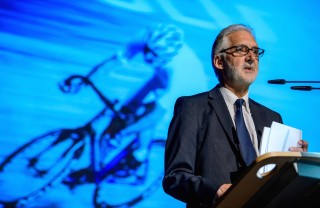 UCI president Brian Cookson says the CIRC report makes it clear that the international governing body "suffered severely from a lack of good governance." Photo: AFP (file)
The Union Cycliste Internationale (UCI) has released the long-awaited report from the Cycling Independent Reform Commission (CIRC), an independent, three-member panel tasked with investigating the causes and patterns of doping within cycling, as well as the role of the UCI and other bodies in those patterns.
The 227-page report was given to the UCI in late February, made available to select media on Friday, and released to the public at 1 a.m. CET on Monday.
The result of a yearlong investigation, the report paints a thorough portrait of extensive doping, cover-ups, conflicts of interest, ineffectual leadership, infighting, wasted resources, and poor governance.
It relies upon internal UCI documents and 174 interviews with active and retired professional riders, team managers, staff from both the UCI and the Cycling Anti-Doping Foundation (CADF), event organizers, laboratory personnel, anti-doping organizations, journalists, and more.
It includes an in-depth analysis of doping throughout cycling’s history, from 1890 to the present day. It investigates allegations of corruption against the UCI; the feud between the UCI and other stakeholders, including Tour de France organizer ASO and the World Anti-Doping Agency (WADA); an alleged lack of independence at the Cycling Anti-Doping Foundation; the efficacy of the Biological Passport; alleged abuses of the Therapeutic Use Exemption (TUE) system; governance issues within the UCI that led to ineffective anti-doping efforts; and allegations of a strategy focused on containment and rider health, rather than eradication, in anti-doping.
“It is clear from reading this report that in the past the UCI suffered severely from a lack of good governance with individuals taking crucial decisions alone, many of which undermined anti-doping efforts; put itself in an extraordinary position of proximity to certain riders; and wasted a lot of its time and resources in open conflict with organizations such as the World Anti-Doping Agency (WADA) and the US Anti-Doping Agency (USADA). It is also clear that the UCI leadership interfered in operational decisions on anti-doping matters, and these factors, as well as many more covered in the report, served to erode confidence in the UCI and the sport,” UCI president Brian Cookson said of the report.
The truth, as laid out by the report, is ugly, if unsurprising. Cycling has had, and continues to have, a doping problem. Riders sought it, doctors sold it, teams demanded it or turned a blind eye to it, staff was complicit, the governing body favored containment over eradication. A revolving door between all parties and a policy of shame-and-shun toward whistleblowers kept it quiet.
Much has changed, but much hasn’t.
• The executive summary
• The full report (PDF)
• The modern peloton is still doping
• UCI’s former leaders go under the microscope
• The reactions
The report’s language is measured in some sections and damning in others. Few of its factual foundations are unfamiliar, but its conclusions are no less troubling for their relative lack of originality.
Riders continue to dope. They abuse the Therapeutic Use Exemption system, micro-dose, and build groups of people around them that enable cheating. One current professional rider estimated, in speaking with CIRC, that 20 percent of the peloton is still cheating; another put the figure at 90 percent.
At the center of CIRC’s findings is a contention that, up until the 2006-07 seasons, the UCI was not in the business of catching cheats, but was instead an organization focused on catastrophe containment and “rider health.” The report weaves around this fact dozens of pages on governance and conflicts of interest and ineffectual anti-doping practices.
Those hoping for high-profile takedowns will be disappointed. The CIRC report is not another Reasoned Decision. Its mandate was not to expose doping cyclists or their specific enablers, but rather to form a comprehensive overview and analysis of doping in cycling, governance failures within the UCI, and the systematic problems that still exist within the governing body and the sport.
It feels, at times, as if the report’s authors have overturned every possible stone, taken careful notes, and then replaced the stones before the cycling public has had a chance to see for itself.
The report avoids naming names, eschewing fresh stories in favor of complete ones.
None of these individuals were compelled to speak with CIRC. “Nor [was] it the task of this Commission to cleanse the sport of its cultural doping problems,” the report states. Interviewees would not be punished for their testimony unless they perjured themselves in the process.
The report’s structure illustrates its purpose. An executive summary is followed by a frank discussion of the history of doping in cycling, from 1890 to the present day. This sets the tone, presenting the problem that must be overcome. This is followed by an in-depth investigation, from numerous angles, into why the sport has always failed to shed its demons.
CIRC evaluates failures in governance, the UCI’s election process and conflict with WADA, allegations of corruption in dealing with Lance Armstrong and others, and abuse of the Therepeutic Use Exemption (TUE) system. It elevates heroes (e.g. Anne Gripper, Silvia Schenk), disparages villains (e.g. Hein Verbruggen, Dr. Lon Schattenberg), and laments the merely inept (e.g. Pat McQuaid).
It concludes with 12 pages of recommendations, from improving internal UCI communication to setting up a common pharmacy for all teams and riders to use during stage races. Some are rhetorical fixes, and many practical ones.
In-depth stories on the report, including reactions from those involved and the rest of the cycling world, will be posted on VeloNews throughout the week. Check back for more.
The post UCI releases CIRC report into doping and governance appeared first on VeloNews.com.