Velonews: Ullrich To Go On Trial For Drunk-driving Crash 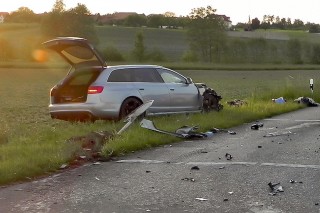 A photo of Jan Ullrich's car taken by police of the Swiss canton of Thurgau on May 21, 2014 after the collision. Photo: AFP PHOTO / KANTONSPOLIZEI THURGAU
BERLIN (AFP) — Former top cyclist Jan Ullrich will go before a Swiss judge on charges of drunk driving dating from May 2014 when he caused an collision in which two people were injured.
“It’s inexcusable to have driven in the state I was in. It was a terrible mistake, and I deeply regret it,” said Germany’s Ullrich, the 1997 Tour de France winner.
Ullrich, 41, risks a fine and jail sentence of up to three years if found guilty.
His car raced through an intersection and hit a parked car before skidding and hitting another car head-on in the region of Thurgovie.
The post Ullrich to go on trial for drunk-driving crash appeared first on VeloNews.com.

Monday's EuroFile: CVV ready to roll; Ullrich hammers out schedule; Valverde can go for it (VeloNews

Monday's EuroFile: CVV ready to roll; Ullrich hammers out schedule; Valverde can go for it (VeloNews