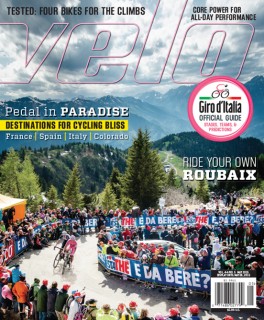 The May 2015 issue of Velo magazine is the Destinations issue and the Giro d'Italia preview.
The May 2015 edition of Velo magazine doubles as the Destinations issue, as well as the official guide to the Giro d’Italia.
First, Neal Rogers takes a look at the delivery of and reactions to the long-anticipated Cycling International Reform Commission (CIRC) report. Did this expensive, high-profile report deliver on its promise, and what steps come next?
Read about the best places to eat, the best climbs, and the heritage of some of the world’s hottest cities in professional cycling. Caley Fretz, Chris Case, and Andrew Hood take you through the ins and outs of Cote D’Azur, France; Lucca, Italy; Colorado’s Front Range; Girona, Spain; and Tenerife, Spain.
No matter which corner of the U.S. you live in, there is a rugged race for you. Spencer Powlison takes a look at the opportunities to get a taste of Paris-Roubaix right here in America as he rides Rouge Roubaix in Saint Francisville, Louisiana.
In the tech department, we have a featherweight face-off. Logan VonBokel, along with editors Chris Case and Caley Fretz, put four of the best super-light race bikes on the market to the test, both on the road and on the stiffness testing jig. See how the Guru Photon, Trek Emonda, BMC Teammachine, and Specialized S-Works Tarmac bikes held up.
Finally, the issue wraps up with everything you want to know about the 2015 Giro d’Italia — the teams, the contenders, the iconic climbs, and the decisive stages. The ‘Corsa Rosa’ is always a fan favorite.
Subscribe to Velo magazine >>
The post Velo Magazine — May 2015 appeared first on VeloNews.com.