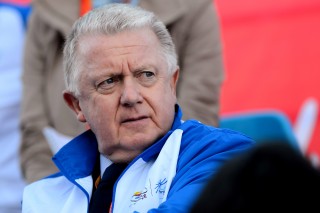 Hein Verbruggen served as UCI president from 1991-2005. Photo: Tim De Waele | TDWsport.com
Ex-UCI president Hein Verbruggen might be down, but don’t count him out just yet.
On Wednesday, the controversial former cycling federation leader countered allegations in the UCI’s recent commission report by unveiling his own website and threatening legal action.
Released in March, the 227-page report X-rayed the EPO era, much of which coincided with Verbruggen’s stint at the helm of the UCI from 1991-2005. The Cycling Independent Reform Commission (CIRC) drew many conclusions, among them that the UCI colluded with the now-banned Lance Armstrong to cover up a doping positive from the 1999 Tour de France, a charge that Verbruggen denied, and delivered a whitewash of the so-called UCI-backed Vrijman Report that looked into doping allegations against Armstrong.
“I vehemently disagree with most of its contents, as well as its conclusions. The report is outrageously biased, misleading, and frequently wrong,” Verbruggen told The Associated Press. “Based on this expert evaluation, the UCI has been informed that legal action is likely to follow.”
Verbruggen unveiled his own website — verbruggen.ch — which outlines his version of events during his tenure as well as his interaction with CIRC investigators. He charged that the CIRC report was not independent, and came loaded with bias against Verbruggen and his successor, Pat McQuaid.
Verbruggen’s counter-attack comes months after the release of the highly anticipated CIRC report, which was a central component of the campaign platform of new UCI president Brian Cookson, who beat two-term president McQuaid in 2013. The UCI spent more than $3 million on the review of the previous UCI administrations, revealing many questionable practices within the cycling governing body, but which also drew criticisms as well from some quarters.
Cookson vowed to sweep away any hint of corruption within the UCI. On Thursday, he defended the CIRC report’s independence and effectiveness.
“If Mr. Verbruggen wishes to sue the UCI, that of course is a matter for him. However, I am absolutely comfortable with the fact that the CIRC report was a wholly independent investigation led by an extremely reputable and experienced team of experts,” Cookson said in a statement released by the UCI. “Their report and recommendations have been very helpful in rebuilding trust in cycling and the UCI.”
The post Verbruggen launches website, threatens lawsuit against UCI appeared first on VeloNews.com.