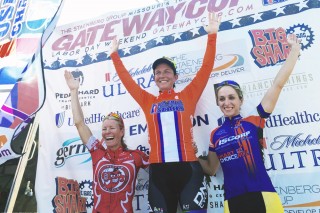 Tiffany Pezzulo won the overall USA Crits series in 2015, riding for DNA Cycling-K4. Photo: Visit Dallas-DNA
Visit Dallas-DNA Pro Cycling, a new women’s UCI team formed by the merger of two domestic elite squads, has announced its roster for 2016. It draws primarily from its precursor teams, Visit Dallas-Noise4Good and DNA Cycling-K4.
“This team is the right mix of experience and raw talent, we have a dynamic group of riders with the right chemistry that are excited to race together,” said Scott Warren, the team’s sport director.
Cyclocross standout Amanda Miller will be one of the team’s leaders. This fall, she notched a fifth-place finish in the Valkenburg World Cup. Earlier in 2015, on the road, she won the “most courageous rider” title at the inaugural USA Pro Challenge Women’s Race. Tiffany Pezzulo will be another rider to watch, especially in criteriums. She won the overall title in the USA Crits Series.
Jamie Gilgen will be a new addition to the team. She had a breakout season in 2015, winning bronze medals in the Canadian national road race championships and the national track championships.
“We are proud to bring another UCI-level women’s team to North America, adding to the strong and talented field. It’s exciting to see the growth of this sport; we’re lucky to have partnered with companies like Orbea which share our desire to support women’s cycling through competition,” said team co-owner, Alex Kim.
2016 Visit Dallas DNA Pro Cycling Roster
Amanda Miller
Anna Grace Christiansen
Anna Sanders
Beth Ann Orton
Breanne Nalder
Jamie Gilgen
Lauren De Crescenzo
Mandy Heintz
Mia Manganello
Nina Laughlin
Sarah Tussey
Tiffany Pezzulo
The post Visit Dallas-DNA announces 2016 roster appeared first on VeloNews.com.

EuroBike, Day 2: A Sram update and a brief visit to Italy (VeloNews)