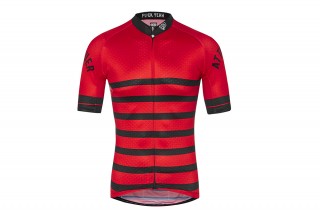 Australian Attaquer cycling apparel company expands its Core Range of clothing in the U.S. Photo: Attaquer
Here’s the Week in Tech — all the gear news, tips, and announcements you need and none of the marketing gibberish you don’t.
Attaquer’s Australian cycling apparel arrives in U.S.
Australian cycling apparel company Attaquer is coming to the U.S. The company is expanding its “Core Range” line of clothing, now offering summer and winter jerseys, bibs, jackets, vests, and other small accessories. Departing from Attaquer’s seasonal, limited-release kits, which are designed in collaboration with various artists and designers, the Core Range is more subdued for a quieter, classic aesthetic. A striped red-and-black Core jersey costs $110, while the basic Core bibs are priced at $175. Attaquer also offers a women’s line of Core apparel that is priced similarly to the men’s line while providing women-specific cuts.
Read More >>
Revolights lights up Indigogo campaign, raising $150,000 (so far)
Revolights’ Eclipse + connected bike lights are crushing the company’s Indigogo campaign. Hitting over 500 percent percent of its fundraising goal, Revolight has raised nearly $150,000 so far, with 10 days still to go. The bright and colorful lights launched on the crowdsourcing site provide 360 degrees of visibility, Bluetooth connectivity, turn signals, ride tracking, weather updates, commute alerts, and more. The lights attach to wheel rims and use a rechargeable battery for a streamlined, low-profile design.
Read More >>
Bike-ID ups security with micro-tag bike marking kit
Bike enthusiasts from 37 countries have joined the free bike registry provided by Bike-ID, a start-up focused on protecting bike owners from theft. Frame numbers are often removed from stolen bikes, so Bike-ID provides a new security marking kit that doesn’t rely on these serial numbers. The kit contains a security sticker indicating that the bike is marked, as well as 300 titanium micro-tags the size of grains of sand (0.4 mm), each bearing the same registry code to help to identify the bike owner. The security marking can be added to bicycle frames of all materials.
Read More >>
NeverLose your bike with PowerUnity’s new equipment tracker
Another bike security company, PowerUnity is taking pre-orders through the company’s Indigogo campaign. The NeverLose tracker is a small, waterproof alarm device that adheres to equipment and connects to smartphones via a free app. With a specially designed bike mount, the NeverLose system attaches to bike so you can keep track of your gear at all times.
Read More >>
Gore’s Active products offer permanent beading surface
Gore’s new Gore-Tex Active products, intended for aerobic activities such as biking and running, feature a permanent water-beading surface. This eliminates the need for face textile on the outside (an extra layer of material) for water protection, making lighter, more breathable products, according to the company. Two cycling brands, Castelli and Gore Bike Wear, as well as two outdoor partners, Arc’teryx and The North Face, will offer garments for cyclists starting in December.
Read More >>
Powers raises money for Jam Fund with quirky ‘cross calendar
Cyclocross champ Jeremy Powers has teamed up with Nuun, one of his sponsors, to create the 2016 JPOW Cross Calendar, which features photos (mostly tongue and cheek) of Powers throughout the off-season. The project will raise funds and awareness for his JAM Fund — 100 percent of the proceeds go to the development program. Watch a fun, behind-the-scenes video of how the calendar was made.
Read more >>
The post Week in Tech: Attaquer, Revolights, NeverLose, and more appeared first on VeloNews.com.