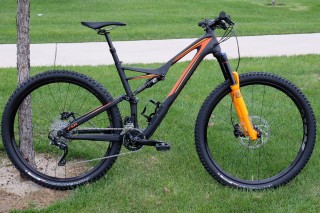 The new Stumpjumper and Rhyme trail bikes will come in three wheel sizes, 27.5", 27.5-plus, and 29er (pictured). The new frames have slacker head angles and shorter chain stays. Photo: Logan VonBokel | VeloNews.com
Here’s your Week in Tech — all the gear news, tips, and announcements you need and none of the marketing gibberish you don’t.
Specialized revamps Stumjumper FSR
Specialized and the Stumpjumper are synonymous. It has been the California company’s most famous, do-anything trail bike for as long as it has been in the mountain bike market.
The latest generation of the Stumjumper — and now Rhyme women’s models — sports a half-degree slacker head angle and shorter chain stays. The 29er Stumpjumper FSR touts 135mm of travel, and the 27.5” model has 150mm. There will also be 27.5-plus models of the Stumpjumper and Rhyme, dubbed 6Fattie.
The one standout feature is the SWAT door in the down tube of the carbon Rhyme and Stumpjumper models. The SWAT door is where the bottle cage sits, and can be removed for stashing tools, a tube, and even a jacket inside the frame.
Surprisingly the standard 29er and 27.5 Stumpjumper and Rhyme models do not use wider boost hubs, a standard we expected Specialized would fully commit to after launching Fuse and Ruze 27.5-plus hardtails last month at Sea Otter. However, the Stumpjumper and Rhyme 6Fattie models will come with Boost 110 and 148 hubs, front and rear.
There will be four versions of the Stumpjumper 6Fattie 27.5-plus bike and three Rhyme 6Fattie models. They are expected to be available in July, but all 27.5 and 29” models are available now.
Trek introduces aluminum Emonda
Trek’s lightweight Emonda road bike has been a hit since its launch last summer at the Tour de France. Now, Trek is releasing an aluminum-framed version of its climbing bike.
The new Emonda ALR models start out at $990 for the Emonda ALR frameset. The highest-end aluminum model is the ALR 6 at $2,250 and comes equipped with Shimano Ultegra. There is also an Emonda ALR 5, which has the 11-speed Shimano 105 group.
The new frame uses the Emonda’s H2 fit and does away with Trek’s proprietary seatpost design, in favor of a traditional 27.2mm seatpost. It also uses dual-pivot brake calipers rather than direct mounts. The new Emonda ALR is available now.
Read More >>
Win a ride in a Mavic neutral support car
Mavic is raffling off a chance to ride in a Tour de France neutral support car. The winner will get airfare, accommodations, and a ride in a yellow Mavic neutral support vehicle for stage 11 when the peloton will summit the Col d’Aspin and the Col du Tourmalet.
Entrants must live in the U.S., Canada, or a European country. Enter on Mavic’s website before June 1 for a chance to win.
Read More >>
Zwift Island now accepting more riders
The social, indoor training program Zwift is now open for anyone. You can now start riding on “Zwift Island.” Up until now, only pros, media, and certain beta testers have been granted permission to virtually train on Zwift Island.
The program is available for download on Mac and PC and will tether to rider’s Bluetooth and ANT+ (via dongle) power meters. Zwift users can ride with friends from around the world, chat, and even chase Strava segments on Zwift island.
Read More >>
The post Week in Tech: New Stumpjumper, alloy Emonda, Zwift for all, Mavic contest appeared first on VeloNews.com.