Velonews: Wiggins Time Trials To Win In Rainbow Jersey Ahead Of Roubaix 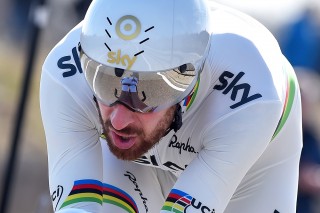 After a strong showing in the final TT at De Panne, Bradley Wiggins' form seems on track for this the next two weekends of racing in Ronde van Vlaanderen, then Paris-Roubaix. Photo: Tim De Waele | TDWsport.com
DE PANNE, Belgium (VN) — Bradley Wiggins time trialled to his first win in the rainbow jersey Thursday in the Belgian stage race, Driedaagse De Panne-Koksijde, and it may also have been his last TT win in that white, world champion’s skinsuit.
Sky’s Brit, and winner of the 2012 Tour de France, overcame a recent illness, which forced him to take antibiotics and skip the E3 Harelbeke last Friday.
The win, his first since taking the world title in Spain, sets him up for the Ronde van Vlaanderen (Tour of Flanders) and Paris-Roubaix.
“I’m on track. I confirmed that the last few days, I’ve been on front; the team did a good job in putting me there. The TT was a good test at the end,” Wiggins said.
“This was one of my first TTs as a pro back in 2002, so it’s probably my last one on this level, it’s been on my mind today and all week, I really wanted to win this one.
“I think I was 11th [12th] the first time I came here in 2002, and I won here in 2009. I always liked this TT, especially when the weather picks up.”
Wiggins flew along the Belgian coast, near the French border, in De Panne, wearing his rainbow jersey. He clocked 17:49 over the 14.2 kilometers and held on for the win, which moved him to third overall.
For Wiggins, it was his last opportunity to win on the big stage in his rainbow jersey. He is pulling the plug on his professional career with team Sky after Paris-Roubaix, April 12. Afterward, he will switch to his continental team and focus on the hour record and 2016 Olympics.
Wiggins only raced one other time trial since his gold medal in Ponferrada. In the Tour of Qatar, he placed third to Dutchman Niki Terpstra and Swiss Fabian Cancellara.
“It’s nice to go out like this with this jersey on, winning a race,” Wiggins said.
“I’d hate to get lost in the next couple of years, punch drunk like some old boxer who can’t leave it alone. I had my time.”
Wiggins’ time almost did not come. He fell sick after helping Richie Porte win Paris-Nice in mid-March, had to take antibiotics, and missed E3 Harelbeke.
“I was a bit sick at the start of the week. The team didn’t want to say anything, God knows why,” Wiggins added.
“That’s why I didn’t start in E3. I wasn’t 100 percent in Gent-Wevelgem, so it’s taken me a few days to get going here.
“What was it? I don’t know, I had a bit of a virus. They thought it was shingles at first. I had this strange rash on me. I started antibiotics, and it cleared up.”
Wiggins now has a clear run for the Ronde van Vlaanderen in three days’ time, Easter Sunday, and for his goal, Paris-Roubaix, the Sunday after.
Brit Geraint Thomas, winner of E3 Harelbeke and third in Gent-Wevelgem, will lead Sky’s Flanders team.
“I want to be in the final [of Ronde] with [Thomas]. I think that’s where you can make the biggest difference,” Wiggins said.
“That last run-in after the Paterberg, if you have strength in numbers, that’s where you can help and make a difference. There’s no point in swinging off after 50km.”
After the Ronde van Vlaanderen, Wiggins will race the mid-week Scheldeprijs classic and take the reins of the British squad for Paris-Roubaix.
The post Wiggins time trials to win in rainbow jersey ahead of Roubaix appeared first on VeloNews.com.

Velonews: After Wiggins, Who’s Next For An Hour Record Attempt?

Velonews: Wiggins Leaves Hour Record For Others To Break