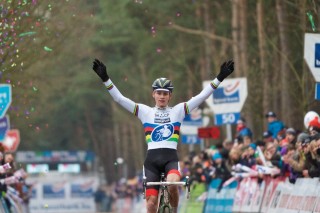 Mathieu van der Poel will return to cyclocross racing at Koksijde, wearing the world champion's colors. Photo: Dan Seaton | VeloNews.com (File).
NOS, a Dutch news organization, reports that cyclocross world champion Mathieu van der Poel will return to racing on Sunday at the Koksijde World Cup after sitting idle for the entire start of the 2015-16 season.
Van der Poel, 20, injured his knee at the Tour de l’Avenir during the summer and had to undergo surgery in early autumn. Now, according to reports, the man who dominated last ‘cross season is ready to race again after spending time training in Spain. His coach, Johan Lammerts, says van der Poel is aiming for a top-10 finish in the third round of the World Cup. Kevin Pauwels is the current leader of the seven-race series.
Read more >>
The post World champ van der Poel to race Koksijde appeared first on VeloNews.com.

Velonews: Sanne Cant Is Superb In The Sand At World Cup Round 3