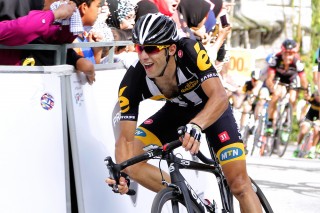 Youcef Reguigui roars to the stage win and the overall lead in stage 7 of the Tour de Langkawi. Photo: Tim De Waele | TDWsport.com

Youcef Reguigui (MTN-Qhubeka) seized the overall lead of the Tour de Langkawi on Saturday after winning the seventh and penultimate stage.
The mountainous 180.8km stage started in Shah Alam and led the peloton up Frasers Hill, 1150 meters above sea level, with a final climb of 5km.
A four-man breakaway went clear and built a lead of nearly 8 minutes before a chase led first by Skydive Dubai and Tinkoff-Saxo, then Sky, began reeling it back in.
With 40km remaining Liam Bertazzo (Southeast) jumped out of the break and tried going it alone. But he was retrieved at the base of the final climb. And as Sky led the charge, MTN-Qhubeka — its ranks much reduced by illness — followed their wheels until the final kilometer and delivered Reguigui to the win.
Sebastian Henao (Sky) finished second, 10 seconds back, with Valerio Agnoli (Astana) third in the same time.
Caleb Ewan (Orica-GreenEdge), the race leader going into stage 7, lost more than 14 minutes on the day and slipped from the top spot on GC to 39th.
“Team Sky took responsibility for controlling the race. And yeah, I was happy when Sky was chasing because I had nobody in the front,” said Reguigui. Team director Michel Cornilesse said Daniel Teklehaimanot did not start, Merhawi Kudus abandoned after 100km, and Natnael Berhane was ailing but continued.
In the finale, Reguigui said, “I was with Natnael Berhane and also with Jacques Janse van Rensburg, who is also a good climber. So, Natnael before 3km said ‘Mate, my legs are not so good,’ so I took responsibility to stay in the front.
“I was suffering a little bit, but the last 1km, any sprinter when he sees 1km he is very happy. … I started my sprint at 300m and won the stage and now have a chance to keep the yellow jersey. So I hope the team is strong to control the race tomorrow.”
With one stage remaining Reguigui has the lead by 10 seconds over Henao with Pierre-Luc Perichon (Bretagne-Seche Environment) third in the same time.
Editor’s note: Aaron S. Lee contributed to this report.
The post Youcef Reguigui takes lead at 2015 Tour de Langkawi appeared first on VeloNews.com.