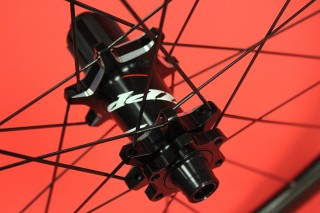 The new 77-177D hub eliminates the option to adjust the bearing preload, like other Zipp hubs. Instead, the goal was to design a better-sealed hub for increased durability. Photo: Logan VonBokel | VeloNews.com
INDIANAPOLIS (VN) — Zipp has officially pulled back the veil on its thru-axle hubs that have been out in the wild since September. The new disc wheels offer better compatibility, a slightly lower weight, and a dramatically lower price.
The three new wheelsets use the same rim shape from the current Zipp Firecrest line, along with an updated hub. The new wheelsets are the same ones Zipp has offered in quick-release disc versions for some time now; the 303 Firecrest tubular and both the 303 and 202 Firecrest carbon clinchers.
The new hub, the 6-bolt Zipp 77-177D, comes out of the box with quick-release end caps attached that can be swapped out for 15mm and 12mm thru-axle front and rear end caps.
Longtime users of Zipp wheels will notice the 77-177D hubs are missing a preload set screw. Zipp’s product manager Jason Fowler said, “Our road and triathlon riders like the option to back out that preload to let the wheels spin freely, but for disc brakes, we wanted to focus on making sure the bearings were sealed well.”
“We’ve struggled in the past with sealing on our hubs, so we wanted to get these out in the wild and tested for a whole [cyclocross] season,” said Fowler. “In the past, cyclocross teams had to replace bearings after just a few races. Riders have gone the entire season without having to change out seals or bearings [on the 77-177D hubs].”
Zipp also unveiled a new skewer that will be included with all of the new disc wheels. It is made of steel and is more attractive than its predecessor, but also uses a wider handle that allows the rider to get more leverage when clamping the hub.
The only true surprise from the launch was that an aftermarket XD Driver body option is available for the new wheels. The XD Driver will make the new wheels compatible with SRAM XG-1199 and XG-1195 mountain bike cassettes, which are designed for use with single-chainring drivetrains. SRAM does not currently make a road rear derailleur that is compatible with the large mountain bike cassettes, and SRAM 11-speed mountain bike derailleurs are not cross-compatible with road shifters.
So what purpose does the XD Driver body serve?
Fowler said the XD Driver body could be used by people who want to run Zipp thru-axle wheels on their mountain bikes during gravel or adventure races, although the new wheels aren’t tubeless compatible, which limits the wheels’ merit in such events. He added that it could be used on “Frankenbikes,” or bikes with a mismatched drivetrain. Its quite odd to hear an employee of a company that makes drivetrains for specific disciplines describe such a product.
We will let you draw your own conclusions as to why Zipp is offering an XD Driver, but we wonder if SRAM’s road launch in one month will shed some light on the purpose of a road wheel with an XD Driver.
In the eyes of some, the new disc wheels will have one major downside: the lack of tubeless compatibility. It is a potential issue Zipp had already discussed internally.
Fowler said, “For the person who doesn’t want a tubeless setup or a potential weight penalty, we’re trying to satisfy both needs without negatively impacting one.”
Fowler also touched on the amount of work that can come along with changing tires on a tubeless rim, whether or not they are tubeless tires. For the rabid cyclocross racer, the tubular wheel will be just the ticket, but personally I’d like to see a tubeless option, as tubeless cyclocross tires have greatly improved recently, and it’s a lower-maintenance option.
The new wheels shave about 20 grams from the existing models, with the exception of the 202 Firecrest carbon clincher, which now uses brass Sapim Secure Lock nipples rather than the aluminum Secure Nipples found on the existing models and on both 303 Firecrest models.
At $2,400 for either wheelset, the 202 and 303 Firecrest carbon clinchers are $425 less expensive than their predecessors, while the 303 Firecrest tubular wheelset retails for $2,300, saving $200 compared to its predecessor. The XD Driver retails for an additional $98. All three wheelsets and the XD driver are available now.
The post Zipp unveils thru-axle 202 and 303 wheels appeared first on VeloNews.com.