What are you best and most useful bike accessories?

Back to cycling. The one thing I really liked about my old Zefal pump: it was 23” long, fairly heavy and made an excellent dog kosh.

swampy1970 said:
Back to cycling. The one thing I really liked about my old Zefal pump: it was 23” long, fairly heavy and made an excellent dog kosh.
Click to expand...

Yeah, loved my full size Blackburn but with the sloping top tubes nowadays, it just sits on the shelf. Actually use it/them on the tandem which has plenty of room. BTW, best riding bike I've had, too bad the frame broke. 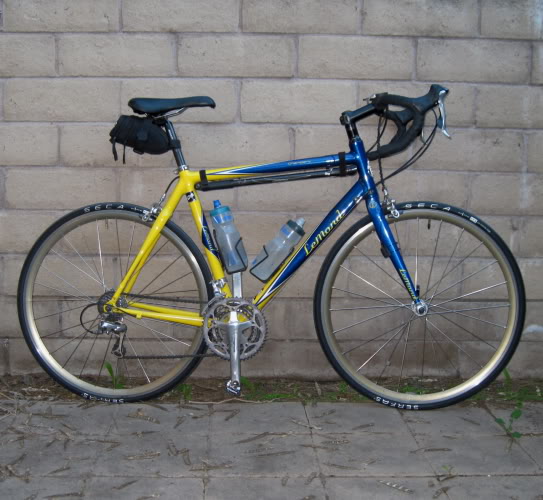 Sorry I’m new and wanted to know how I can post something I had a question back? It’s not giving me the option and I’m on my phone

Germanrazor said:
Hand pumps for me have not been very good and I have a nice one. OTOH, I have had success with the CO2 route. If this world was perfect, I would have a SAG vehicle every corner for my needs! LOL
Click to expand...

There are only 3 or 4 good mini pumps, the rest are junk that is incapable of coming anywhere near 100 or so psi you desire regardless of their claims that they can reach 160 psi. Of those 3 or 4 pumps the best one that I've ever used for a high-pressure road bike tire is the Lezyne Road Drive in the large size, I wouldn't fool around with the two smaller sizes, those will take more strokes then the large one, and I'm not sure if the small one could even get to 100 psi. I've had my Lezyne since 2013 and it still works great to this day. The other good mini pumps take more strokes and strength to get the psi up to 100 vs the Lezyne, but they will do it.

I have one of the other good ones called the Topeak Racerocket HP, this one will get to 100 psi but takes more effort than the Lezyne, but it's not a Hercules effort, just more strokes by about 50 strokes over the Lezyne. It's a good pump, but the Lezyne is just a better pump, both seem well built, I haven't had any problems with the Topeak either in 5 years that I've owned it.

That said, I also have a Zefal HP frame pump for my touring bike, and yes, that pump is a lot easier to use than any mini pump, but that's due to its size, but most people don't want a clunky frame pump on an $8,000 carbon bike even though back in the days when I raced that's all we had were frame pumps, but today's riders cringe at the thought of a large pump.

I have this Lezyne frame pump and no is it worth $50.

Nice connection with the screw on presta hose. But I have pumped it up to 90 psi on the road and the body got really hot, too hot to handle. Enough to get me home but nowhere near the psi claimed. If it weren't so purty, I'd do away with it. 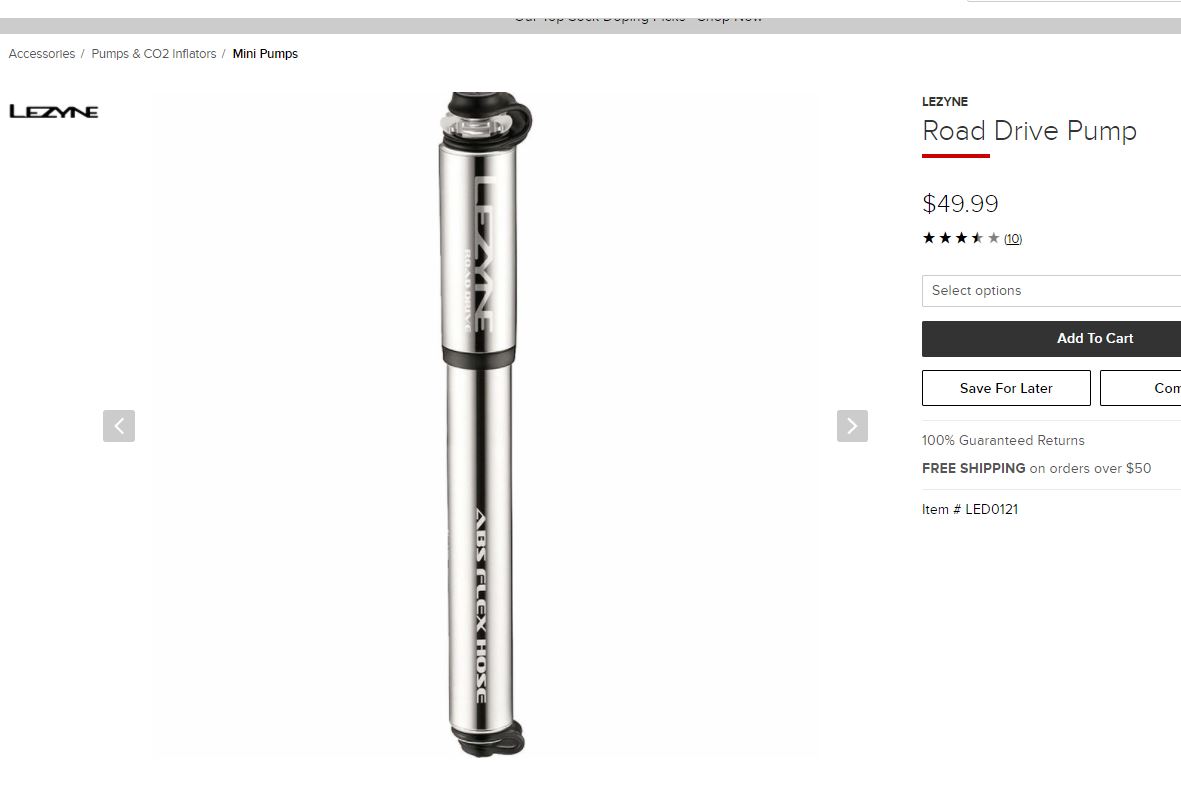 Seriously, I found a 7 in Blackburn really basic stick looking pump on a clearance table about 15 years ago FOR ONLY $6!!!! It pumps up to 100 no problem. Sadly the mount takes up the entire water bottle bosses and I need both bottles while riding in some places. It does slide into my seat pack straps but I can't help but think it's going to slip out sooner or later. 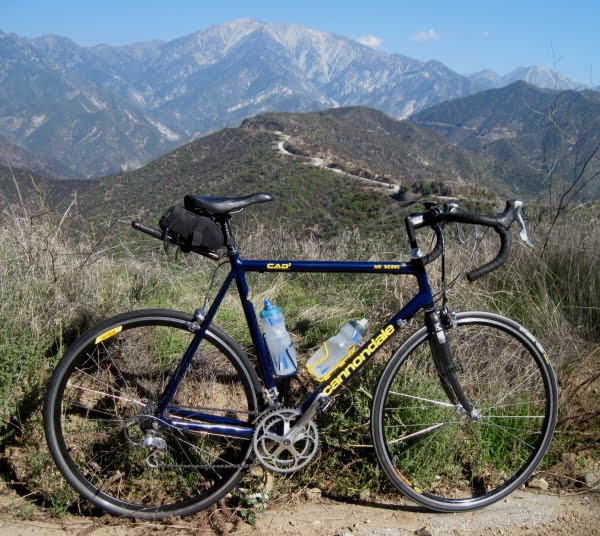 DarkEdge said:
First of all U-lock, not a cable lock. And use it everywhere, even if you're going inside for 5 minutes.

Front and back lights if you see yourself riding at night.

Also gloves, they keep you from skinning your hands in the event that you wreck.

And more padded gloves protect your wrist from vibrations due to riding on less-than-perfect pavement.

I rode a half century last year where some roads should have seriously been decommissioned by the city because there were so many potholes and gravel on lots of stretches.

Lastly, they work somewhat well at keeping your hands warm on cooler rides.
Click to expand...

swampy1970 said:
A set of small allen keys held together with an elastic band. Forget multitools, a set of 4" long allen keys are easier to use, weigh less and are cheaper. When I mean cheaper I don't mean something from the dollar bin at the local car parts store - buy something good that'll last and not round off the hex bolts or break when you need them in the middle of nowhere. That said, with the exception of a seat height change after a mid ride crash and ride back home, I can't remember then last time I used them. I take a chain tool and pin with me for the first few rides after I put a new chain on just incase - so no need for that built into a tool. Can't be doing with small chain tools either. Go big or go home.
Big Park Tools tire levers.
As for gloves - I prefer thinner gloves and add padding under the bar tape where necessary. That way you can have less bulk under your hands when on the brake levers but more padding when riding on the tops or on the transition area down towards the brake lever hood and on the drops too.
Click to expand...

Thank you this info, i was looking for it

Ah yes, same here, as far as multi tools. I take 4 allen wrences and slide them into a small side pocket I have on my saddle bag. Wouldn't even know they are there vs the wasted space of a multi tool.

I do have a small plastic envelop type deal that I got with a watch tool I bought online. The envelop is great for holding the allen wrenches and slips easily into the side wall of the seat pack.

I myself like to keep metal away from my spare tubes in the seat pack hoping to avoid damaging the tubes even though the tubes are kept inside two baggies with a bit of talc powder. I use 2 baggies and the outside one is always torn and thrashed so 2 protects them better than one.

A good bag (either seat or frame bag) is key for holding tools/tubes/snacks/etc., and I also agree with good lights! They expand the time available to get out and ride, so super valuable.

Also only slightly bike related, but a good buff/necktube/gaiter if you will be riding in cold conditions. Keeps the wind from coming down your jacket, and is super versatile to be able to pull up over cheeks/chin if the wind is really biting. Plus some people use them as COVID coverings, so that is kinda a benefit

Mr. Beanz said:
BTW Froze, I spent an hour walking around our hood last night taking down addresses of these illegals who come here for a better life but degrade ours. Live bands, tubas, trumpets, blasting till 2 am by a bunch of illegals who think our residential area is their concert hall. I call dispactch and online complaints, seems to be helping.
Click to expand...

You are right the Jews had the worse but not in America they didn't.

I think the problem with most Americans today is that they have NO clue what it means to serve their country, mandatory draft ended so now only those that want to volunteer go in, most Americans don't want to go in so they sit on the sidelines bitching and complaining about the US. I don't believe that had the draft stayed we would not be having as much trouble as we have today, not saying we would be living in the perfect world, but a lot more people would realized that they're not entitled little babies, and there would be more respect in our little world. Combine that with the fact that universities are cranking out teachers to be weenies! I have schools where I live in my city that call their kids FRIENDS! They're not our freaking friends, their is a pecking order in society and they're not being taught that because they're not being taught about respect, so then we have incidences of cops doing stuff because the offender won't comply then the next thing you know the officer(s) is in major trouble, this is why officers are quitting all over the nation, they aren't be protected.

Yeah I understand you shouldn't pick on some race as a cop and abuse or kill them, but what they don't tell us is that more black cops kill black citizens then white cops do but you don't hear about that.

The other reality is that only 1% of the nations cops are ever involved in a shooting, a huge percentage of cops will go through their entire career never having to shoot anyone. Police shooting are increasing but that's because offenders are no longer afraid of cops due to complete lack of respect taught to them by public schools.

People need to learn how not to make a cop afraid when getting pulled over to. I immediately turn on my emergency flashers and dome lights, get my paper work out and place it on the dash in front of me before they get out of the car, my hands then go on the 10 and 2 o'clock position on the steering wheel where they remain the whole time until I ask permission to pickup those papers and hand it to them, then the hands go back on the steering wheel and stay there. Even if I'm carrying a gun and they happen to ask if I'm carrying I say NO if the gun is hiding from their sight, they have no cause to search my car for a simple traffic violation. I've been pulled over a lot because I like to drive fast, and I haven't gotten a speeding ticket in over 25 years, they just let me go! I had a cop pull me over about 6 months ago for doing 20 over, I did my routine, was respectful, never got mad or frustrated, after all he was simply doing his job, comes back after running my drivers license and told me to have a nice day and slow down! Thank you sir!

It's that sort of lack of respect in our society today is why shootings are going up, someone doesn't want to comply and becomes combative is just asking for good a strangle hold to get them to comply. I'm sorry, but people can't be combative and not think the cop can't do anything while they hurt the cop, but that's where we're going with all of this, the cops are now out in the cold.
You must log in or register to reply here.

S
What is the best cycling equipment for beginners?

What are the best game providers in Norway

What is best to measure heart rate?

C
What is the best thing about glucotrust ?

Bike Cafe Feb 13, 2022
CamrynStark
C
A
What is the best thing about green dolphin cbd gummies ?

S
What is the best thing about eagle hemp cbd gummies ?