What basic gear is a 'must have' for cyclists?


You are using an out of date browser. It may not display this or other websites correctly.
You should upgrade or use an alternative browser.
J

Finally. What about rain gear? Are they cheap to get.

Taking up cycling. I know that a helmet and lights are essential.
Click to expand...

Exactly how essential a helmet is can be endlessly debated. Me, I’d settle for calling it a sensible choice.
Lights, depends on when/where you ride. Some places, it’s not even legally required after sunset.

johnwalker1 said:
What about jerseys and bottoms.
Click to expand...

Jerseys are nice. Wicking, fast drying, don’t flap around. The pockets can be handy.
But not essential. In nice enough weather, I might even ride in a cotton tee.
Cycling tights are also nice. No wrinkles or seams sandwiched between body and saddle.
But not essential either.

johnwalker1 said:
Are there all tight clothes where male bulges are so visible.
Click to expand...

There are baggy MTB shorts that are OK to ride in if you’re very self-concious.

johnwalker1 said:
It was awkward talking to my housemate after his long cycle.
Click to expand...

Unless your housemate was obviously ”excited”, that says more about you than him. It’s a body, we all have one.

johnwalker1 said:
Finally. What about rain gear? Are they cheap to get.
Click to expand...

Rain gear for cyclists come in a wide price range. None work well for intense riding. Waterproof enough to stop rain, you get steamed from inside. Breathable enough to air out sweat, rain can punch through.
IMO, forget about keeping dry in the traditional sense. Concentrate on keeping warm.
Reactions: Rsmith1155

Essentials imo, spare tube or a patch kit. Frame pump or equivalent to fix a flat on the road.
Reactions: Rsmith1155

I hear you on the bulge thing, I don't like people starring, so I simply wear mtb shorts while riding my road bike.

Water (and a electrolyte replacement drink) is essential, and maintaining the temp of the drink is important. On hot days you need to keep the drink as cold as possible and a simple single walled plastic bottle will do nothing for keeping the liquid cold, so either get a Camelbak Podium Chill (or Dirt Series Chill if you're riding off road); or if it gets really hot where you live they are now making vacuum stainless steel bottles for bikes, a bit heavier than the plastic jobs but they'll keep your drink cold for the entire ride; but instead of buying expensive bike specific stainless bottles go to Target and take along a water bottle cage and find a bottle that will fit, I found the Coleman FreeFlow Autoseal Insulated stainless steel bottle to fit my cages and it only cost $16 which compared to a bike specific one costing $20 and up to $50; and the Coleman has some sort of surface on the bottle that prevents the bottle from slipping in the cage which the bike specific ones didn't have, and I couldn't scratch this surface either. I have 5 of these 24 ounce bottles for my touring setup.

If you go with the Camelbak to save weight what I use to do when I rode in the Mojave Desert is fill one bottle with a chilled drink and put it in the freezer overnight, then before the ride take a second bottle and fill it full with ice and then pour a chilled drink into the bottle. A desert ride could easily see temps pushing 100 degrees so the froze bottle would be unthawed enough to drink after about 2 1/2 hours. Of course in that climate I carried 3 bottles and a 70 ounce Camelbak on my back. Anyway on hot days you need to keep your core body temp down and drinking a cold drink helps that.

Sorry a lot of stupid rambling about carrying a drink.
Reactions: tdcadillac
R

Mudguards will keep you more dry than any rain gear. Tools, pump, spare tubes, saddlebag to carry tools and tube. Obviously you may need a pump or some other inflation tool for inflating tu https://trackeasy.fun/usps/bes when you're out and get a puncture. A reasonable lock if leaving your bi https://showbox.tools/ ke anywhere unattended. Bib shorts, jersey, arm and leg warmers. I don't bother with rain specific gear as I find it too hot to wear but do find a gilet useful. You could wear shorts over cycle gear if you like.

You should always bring a headlight and tail light if you ride during night ride time. These are the most important things that you need to bring to avoid from getting rear ended.

Is it a glove also must have? How about glass?
D

Wearing a helmet that fits well every time you're on a bike helps protect your face, head, and brain if you fall down. That's why it's so important to wear your bike helmet whenever you are on a bike. 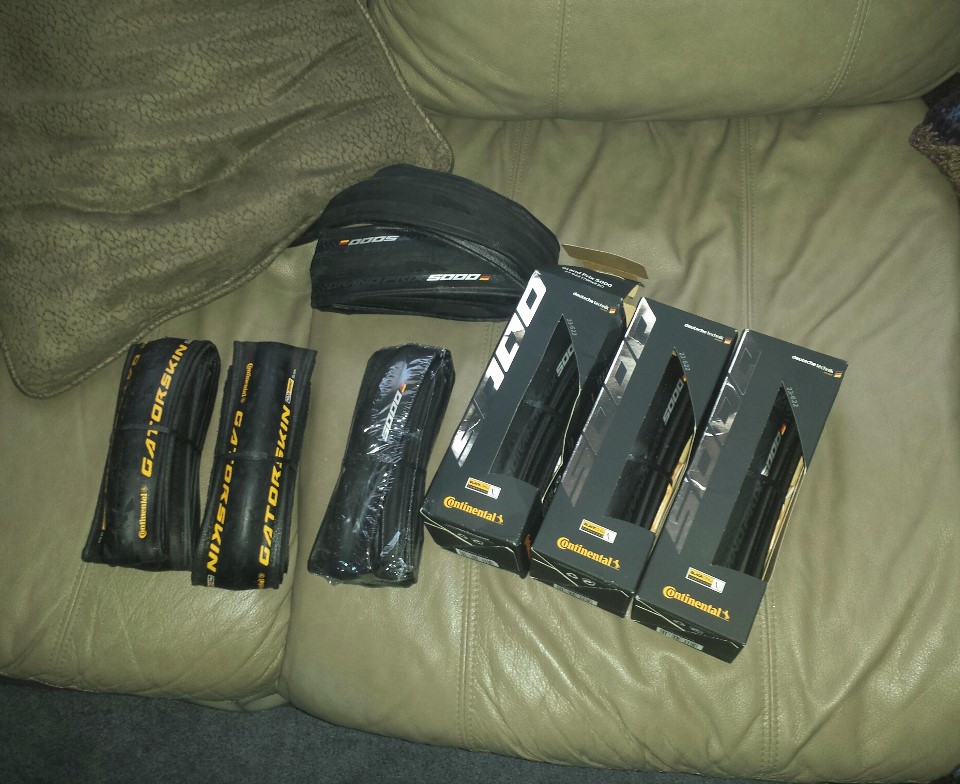 Patch kit, a mini pump along with a first aid kit if you get hurt
Reactions: tdcadillac

you can get past the male budge thing by wearing MTB shorts over your regular shorts.
J

Shorts
Helmet
Water bottle
and bike is must have gears for bikers.

In addition to the above...floor pump. And I now believe daytime running lights are also essential.

Maybe not everybody, but I need glasses. Nice sunglasses for days and nights, even a cheap pair of clear safety glasses work well.

Maybe it is just me but I have a hard time with wind in my eyes. Need to protect or they get irritated. Dust, dirt, wind, and bugs.
B

Anyway, as some of you know I have relied on glueless patches for over 30 years, first from 3M then Park bought the rights so I use the Park brand to this day. I had a series of failures this month, which I still don't know what the cause was. I emailed Park and they said that tube manufactures have changed some of the chemicals that make tubes and therefore some tubes may not accept glueless patches anymore. Hmmm, all I can say about that is, ok.

So I think one of two things happened, not sure if both things contributed to the cause. I prepared the tube-like I always have done, cleaned with alcohol, and applied the patch, installed the tube, filled with air, then about 15 minutes it was flat, what? So I took it all apart and noticed the patch had come slightly undone, this is the weird part, the patch peeled right off like scotch tape. Ok, so I thought the patches I was using were old, so I got another patch box I had, prepped the tube again, and applied the patch, and installed, roughly 15 minutes later the tire was flat again. Took it all apart only to find the same thing that happened the first time. I decided to go to a bike shop in town and buy a brand new box of glueless patches, took the tube out and all I did was buff the tube but did not use the alcohol this time because I was getting a bit ****** doing the whole process over and over. Applied the new patch and it's held up now for 4 days without any abnormal loss of pressure.

So my thoughts are, either the patches I had sat in a warehouse for several years, which Park said was possible, or the alcohol somehow reacted to the butyl, due to the new chemical composition, and made the patch adhesive non-reactive. So from now on I just won't use alcohol, because I have a feeling that may have been the problem? I kept the old patches so the next time I get a flat I use one and not use any alcohol and see what happens.

Stay tuned...though not sure for how long since I don't get flats but maybe once every 2 years.
Reactions: Mr. Beanz

I've posted several times on several forums over the last year or maybe even two, that Park changed something in their glue or just got cheap and cut back on effective chemicals.

So the issue you bring up, could be exactly that but I have had bad luck with Park patches dating back to a couple of years ago. I post then a couple others will say I am crazy and that I don't know how to patch, ok whatever!

But either way, that is the main reason I started using the vulcanizing patches. But the glue dries up after the first use. So I did some research and found that many claim that the Rema (?) brand glue stays good for a long period of time and doesn't dry up as fast as other brands.

So in short, I stopped using Park glue less patches about 2 years ago as I could tell a difference. Their issue or the tire mfg'er, who cares, they don't work well!

On my touring bike I carry a pack of glueless patches, BUT, I also carry a container of Rema patches with glue just in case. I always carry a spare tube but I'm a backward type of guy, I hate doing things twice, so I patch on the side of the road before I resort to the spare tube.

What kind of ****** me off about Park, even after they admitted that patches could set in a warehouse for several years, is that they never offered to send me a free pack of patches, which would have set them back a whole $1 at the most plus postage.

Oh, I think I forgot to mention that I found the little green patches Scabs brand work really well. Just like Park used to work but doesn't anymore! Funny thing I got them at Wally World, not even a bike shop!

I actually like the little plastic case more than the Park as well. Has a chamfer on one edge for easy handling and operation. 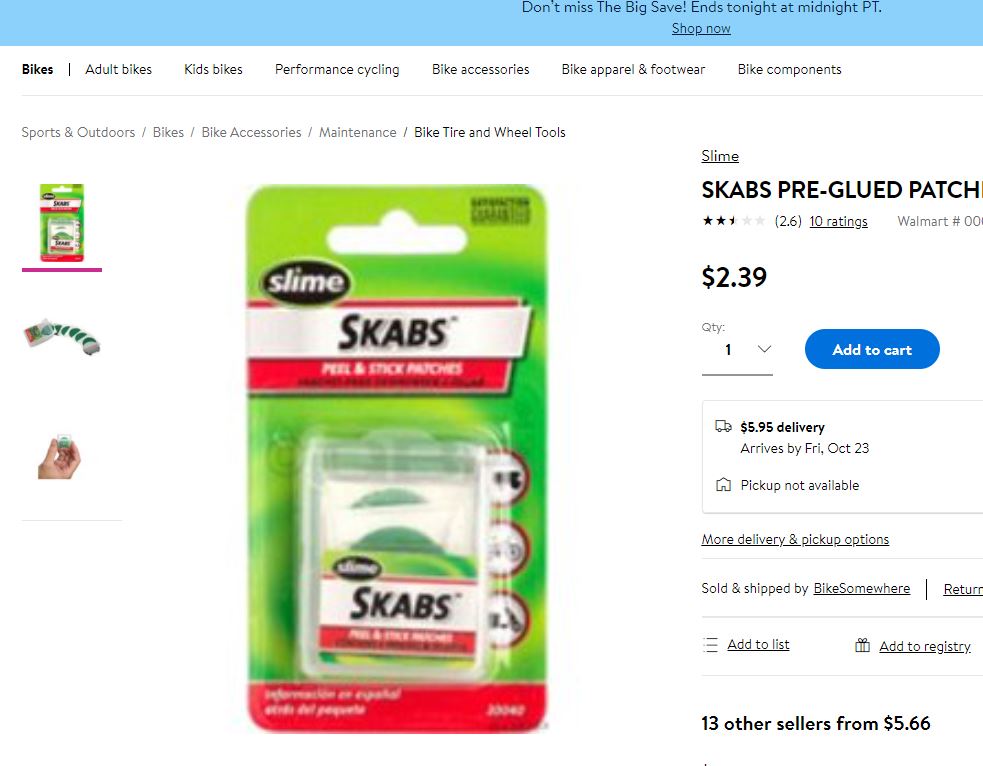 Intro and some basic questions