What basic gear is a 'must have' for cyclists?

I tried Scabs about 10 or so years ago and they failed miserably back then; about 6 months ago I tried Lezyne Smart patches and they too failed miserably; years ago I tried Specialized Fat Boy glueless patches and they worked as good as the Parks but they stopped selling them after about 4 or so years of marketing them. I haven't tried the new Topeak Rescue glueless patches, I've heard they're really good, so the next time I get patches I'll order those and give them a whirl.
Reactions: Mr. Beanz
C

Lights for night riding if you're into that

I love riding at night. Actually feel safer. The course goes east to west and back. I see so many cyclists heading into the sunset without lights and wearing dark colors making it impossible to see them in the shadows of sunset. Scary!

But riding at night, there is no way I can't be seen unless it's a careless driver that can happen in the day as well. But I think the red strobe and ankle bands create movement that is an eye catcher.

One thing I noticed in my last pic from Wed, was the little saddlebag I bought on ebay for $6. It has a reflective strip and though the bag is pretty small (don't need many supplies riding local midweek rides) the strip showed like crazy in the pic.

If we're talking about nights, I use 2 headlights, 1 on the bars and 1 on the helmet (love the eye tracking availability), 2 red blinkies, 1 on the rear helmet and 1 on the seat post. 2 tri color ankle bands on my legs and the seat pack reflective strip.

My saddle also has an unnoticeable to the eye during the day, reflective strip on the back. 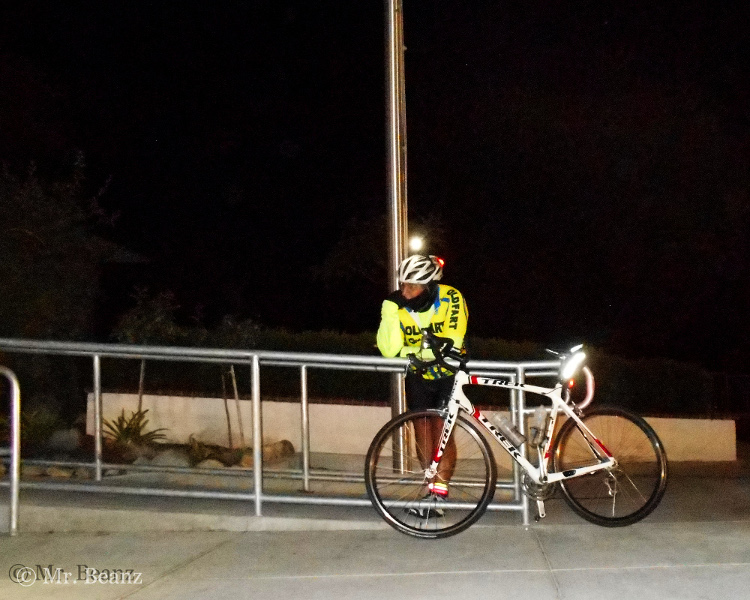 Hi! The two essentials for cyclist is actually the bike itself and the helmet.
You can also include these on your gear checklist before you go:
Water for hydration
Snacks for energy
first aid
eye protection
bike lock
watch
map
and some Core bike repair items.
I hope this helps.
C

vc cycle said:
Is it a glove also must have? How about glass?
Click to expand...

For me, gloves are a must-have in winter/fall. I live in the Netherlands where it can get pretty cold, and if you have a cycling trip of over an hour you will literally have no feeling left in your hands.
C

It's not awkward to talk , recently I bought volotoze neoprene shoe cover and nixfrixshun ultimate chain lube both are cheap and very necessary in the rain.
P

1. Helmet with good ventilation and visor
2. Eye protection, just reliable
3. MTB backpack with hydration system and back protection
https://wildproofgear.com/best-mtb-backpack/
4. First aid with all the essntials but takes minimum space in your MTB backpack as possible
5. MTB multitool, really you don't need a regular multitool here. I mean something like Crankbrothers
6. Snack/ water
D

Some water or a water bottle that you can fill
Some nice lights
A good helmet (never get second hand!)
A phone holder (very handy for gps tracking)
S

Maybe it is just me but I have a hard time with wind in my eyes. Need to protect or they get irritated. Dust, dirt, wind, and bugs.

Speaking of carrying a mini pump I noticed no one mentioned any particular brand. A HUGE percentage of mini pumps are virtually useless at pressure exceeding 70 psi even though they claim the can reach 160, maybe they can reach 160 if your name is Superman!

I've tried a lot of mini's and sent them all back except for 2. One was the Topeak Racerocket HP, and the other was the Lezyne Road Drive in the large size. I also have a SKS Raceday Carbon, it's no longer made, that one use to reach 100 psi, but I think the seals may have dried out because it doesn't want to do that anymore, the other SKS models suck.

The Lezyne offers 3 sizes of the Road Drive, knowing what I learned from the all the fails I ordered the largest size, which isn't really that large, however that one out performs the Topeak by requiring less strokes and less effort to get to 100; it weighs a tad more than the Topeak by about 20 or 25 grams, not a big deal. I would not waste my money buying the smaller sizes of the Lezyne Road Drive models, as the size decreases your effort and number of strokes will increase, and I doubt, though admittedly not sure since I didn't bother to try it, that the small Lezyne Road Drive would even reach 100 psi, and if it did you would be very tired afterwards.

It's worth the money to spend a bit more and get a pump that will reach the PSI to stay on your ride so you don't have to turn around and go home. But don't go off thinking that spend a bunch of money on a pump like the Silca Pocket Impero pump for $120 will work better, it won't, I had a friend who got one and he couldn't get it to go past 60 psi! Like I said most mini pumps are a huge fail, I haven't tried all the mini's on the market, so there may be one or two others now other then the ones I mentioned that could get to 100 psi with not as much effort as the others, but if you buy one other than what I mentioned immediately when you get it deflate a tire and try pumping it up to your riding PSI level, if it doesn't make it or it takes a lot of effort to get there take it back, that's what I had to do.
S

Maybe not everybody, but I need glasses. Nice sunglasses for days and nights, even a cheap pair of clear safety glasses work well.
You must log in or register to reply here.

Intro and some basic questions