What was the last thing you've bought for your bike?

Mine was a new seat post, I bought a longer one because I'm using a short on and it's already extended up to the end. Just bought it the other day.

Before the injury on my leg made me stop riding, I had bought a pump to maintain the air in the rear tire which seemed to be escaping. But I was not able to use that pump much when I quit and I gave it to my nephew. I also had plans of purchasing the fancy backlight that is attached under the saddle but it did not materialize.

I think the last think I bought was a Zefal HPX frame pump, and a set of Shimano 530 pedals for my touring bike.

A Rock Bros headlight for about $35. Heard on a forum that they work well for the money.

Outlasted my 100 dollar light but very slightly not as bright. Good trade off though.

Today a bag of 30 packets of Liquid IV electrolytes. Does that count? 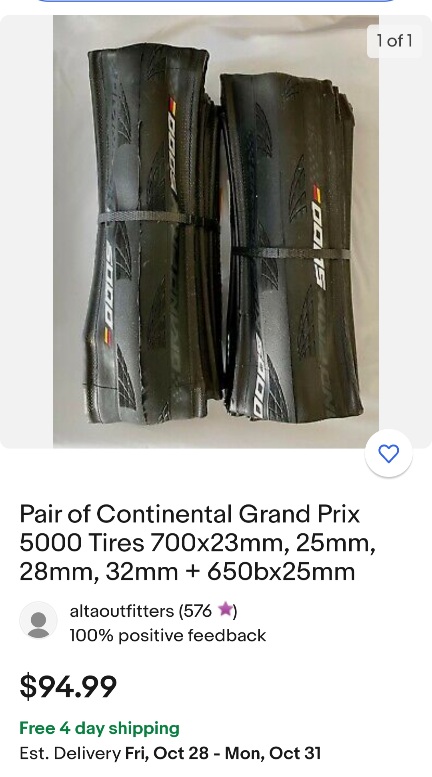 A second Rock Bros light. Heard it was pretty good. I bought one and it's really close to my $100 niterider. But 1/3 of the price at 32. It actually outlasted the more expensive light as far as run time.

So I bought a second one. Little bonus with the hb mount and Garmin mount.

Body is aluminum so not a bad deal.

Excellent share of equipment there . Good to hear input on the equipments looking for night gear .
The $15.00 ebay-special not bright enough . Not that I've been out at night?!!

Nice conti tires for the road bike. Did you score a pair Mr Beans ? Like to hear how they ride
Reactions: Mr. Beanz

Fourlegsgood2wheelsbad said:
Excellent share of equipment there . Good to hear input on the equipments looking for night gear .
The $15.00 ebay-special not bright enough . Not that I've been out at night?!!

Nice conti tires for the road bike. Did you score a pair Mr Beans ? Like to hear how they ride
Click to expand...

Been riding Conti for 20+ years. Always been a good ride. Tried other expensive models, Specialized , Vittoria, a few others.
Always come back to Conti. Latest 5000 model, had really good luck with them. Not one flat and sidewalls seem to be stronger than past versions. Current rear tire just about to go bald and not one flat. I'm impressed over the last couple thousand miles.
I do only order online where I get them for about 45 bucks give or take. Can't see paying 80 at a local shop.
Reactions: Fourlegsgood2wheelsbad

recently bought a set of pedals for my new XC trail bike , a Scott Scale 970. Had to compromise
( yeah it's a hardtail )
For anything but very technical riding I prefer step-in pedals off road.
The pedals are "eggbeaters" , by crank bros. Had reservation on this obscure four- sided design. First ride out had to cross several streams - the eggbeaters saw some fairly nasty muck from creek bed. Had several rides now varied terrain.
Pedals working out well had not once unintentionally released on me ,found if I just place shoe- foot over spindle after a revolution or two my weight over the pedals engages them without fuss. I've got the provided platform pedals if I decide to go to a bike park or am practicing manuals and wheelies .
This is my first 29er.! OMG.
I'd been out of the scene for 26 years , as far as MTB. Will not ride 26" again.
Some of same trails as I'd done decades back, but with little braking and sooo much traction from the 29" tires.
Last edited: Nov 7, 2022
Reactions: Mr. Beanz

I generally like to take care of my bike, starting with buying new brakes and installing them.
D

MuckyNutz fenders front and rear for my trail bike.
You must log in or register to reply here.

What was the last thing you ate?

What was the last thing you ate?

What was the last thing you wone?

When was your last crash?

When was the last time you had a flat?

D
and last night you thought today was friday

Cycling Equipment Nov 9, 2007
datakoll
D
C
When was the last time you saw

"That was nasty crash inside the last 3km. A lot of people went down hard" - says Alex