Who are your favourite Cyclists? 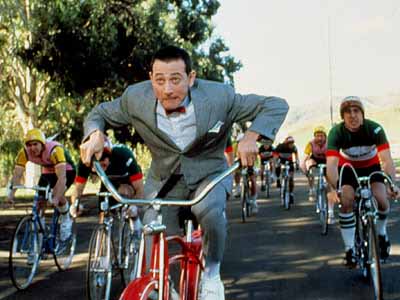 I'm going with her. Dunno her name. Don't care.

Bernard Hinault. Doesn't really matter if it's ol' school Hinault of the late 70's or 80's on the bike or Hinault Pt Deux handing out the TdF podium asswhoopings to unruly noobs that dare to rush the stage. On the bike he attack just because he could... Such aggression hasn't been seen since sadly.

Robert Millar. The reason why I started racing. An oddball Scot who'd be up there with the first salvo of English speakers paving the way and ultimately becoming the first English speaking rider to take the King of the Mountains. His dry wit and sharp tongue in interviews matched his talent on the hills and his insight on the current state of cycling is always a good read.

Lance. F--k the haters. The lad attacked and put on a show. If he doped, then he was on the same playing field as all the other guys and they attacked about as much as dead hamsters. If he didn't dope then he brought the ass whoopings and killed it.

Wiggo. Ok, that trend was broken but he's a fellow Brit and has done it all - Olympic gold medals on the track to the Tour. Complete domination in the events he's ridden this year. He did what I thought Boardman might do.

Froome. I can't wait to see what this lad can do now he's been given the 1 spot on Sky for the Vuelta. I hope Brailsford can work his tactical magic with him in the expected battle with Contador.

Chris Boardman. From seeing him go from a junior to one of the best pursuiters and time trial riders in the history of the sport and inbetween still having the breath to give a nice "dig in" shout as he passed me more than once in a time trial was very interesting. Seeing one of the fairly local lads slay Big Mig in a prologue by more than just a couple of seconds and take 5+ minutes out of the best in the GP des Nations was both part awesome and part unbelievable... and he was always just a regular lad.

Sean Kelly : the hardman's hardman.
Set off to Europe by himself and built a reputation that is huge in cycling and huge in terms of Irish people in sport.
Loved the way he raced - when he raced, he raced to win and cycled throughout the season.

Miguel Indurain : Always like Indurain. He was a phenomenal cyclist who's palmares speaks for himself. Physiologically he was out on his own.
More importantly he was a generous opponent and a nice man. Modest, quiet.

I like most of the cyclists to be perfectly honest about it.

I hear Jan is gonna be a daddy again soon.

I tend to prefer guys who may not have the best palmares, but who are either hard men (Gilbert, Cancellara, Voigt) or guys who animate races (Voeckler, Voigt, Hoogerland).

I'm going with her. Dunno her name. Don't care.
Click to expand...

All greats (Hinault, Armstrong, Kelly and Roche were still my faves though)

I hear Jan is gonna be a daddy again soon.
Click to expand...

Congrats to him and his wife!

We all know the story well.

wikipedia: The following year in the 1986 tour, LeMond was made co-leader of the La Vie Claire team alongside Hinault, with Hinault publicly promising to ride in support of LeMond to repay LeMond for the work he had done in 1985.[10][11] What he did not say was that the help was contingent upon LeMond demonstrating that he was clearly the better rider.

Of course Hinault did not say his loyalty and appreciation was all going to be conditional on his own chances. Nobody likes to admit they are an ungrateful and shelfish person who puts himself above the team. Unless they are forced to. Happily, the good guy would kick his rear that year, justice was served and almost everyone was happy about that.

My favorite cyclist is Lance Armstrong.

My favorite cyclist is Lance Armstrong.
Click to expand...

Same, it was a shame his father passed away yesterday. /img/vbsmilies/smilies/frown.gif


Same, it was a shame his father passed away yesterday. /img/vbsmilies/smilies/frown.gif
Click to expand...

Yes.
And shame he couldn't meet uncle Louie. At least, brothers are together now.
Wonder if Neil wondered if Heaven is alike the Moon? Or if the Moon is part of the Heavens... Or where the Heavens' jurisdiction ends?
Was he on Heaven or the Moon?
I know I would be on Heaven if I would get to the Moon... And back.
On bike.

I used to read her blog. One fine looking lady right there!
You must log in or register to reply here.

Next Generation Mar 3, 2021
galaxygrand88
G
A
What Is Your Favourite Navigation And Tracking Gps/phone Solution?

Your Favourite Place You Cycle To?

Touring and recreational cycling May 6, 2016
pwarbi

What is your favourite documentary? It can be either a TV show/series or movie.

What is your favourite plant?