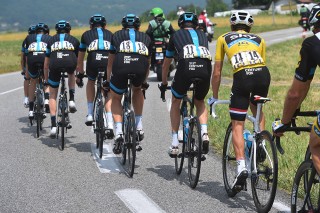 Sky's partnership with clothing sponsor Rapha will end after next season. Photo: Tim De Waele | TDWsport.com
Rapha will stop supplying Team Sky with clothing and kit at the end of the 2016 season, the company announced Tuesday.
The British team and its British clothing supplier are entering the final year of a four-year deal.
“After reflection and discussion, both Rapha and Team Sky have decided not to renew our Partnership beyond the current four-year deal, which concludes at the end of the 2016 season,” said Rapha founder and CEO Simon Mottram in a statement.
The split, which is still a year away, does not spell the end of Rapha’s connection to bike racing.
“From 2017 we will continue to support racing in many ways, especially locally, but we will also focus on new geographies, partnerships and categories. We will be announcing news on these exciting developments soon,” Mottram said.
Rapha formerly supported the British Continental squad Rapha-Condor. The company previously looked into supporting a major women’s team, but has yet to pull the trigger.
Team Sky took to Twitter to announce the end of the partnership.


Rapha’s position as a trendsetter in cycling style will make its extrication from Team Sky more complicated than the usual sponsor split. Sky’s look is very much Rapha’s look. It’s an easily recognized, distinctive polish; understated, always with contrasting highlights. Unlike most clothing sponsorships, the partnership between the two brands has been one centered as much on image as on performance.
The partnership has been a boon for both brands, as Rapha tapped into a quickly growing British market. Fans of Team Sky and the team itself benefited from its association with the high-end, marketing-savvy brand. But it was an expensive proposition for Rapha — though precise finances are not released, the company was responsible for providing tens of thousands of individual items each year, ranging from race kit to track suits. It also bore the brunt of development costs for new items demanded by the team — better rain jackets, skinsuits, and more were all developed as part of its Team Sky partnership.
The post Rapha and Team Sky to part ways after 2016 appeared first on VeloNews.com.