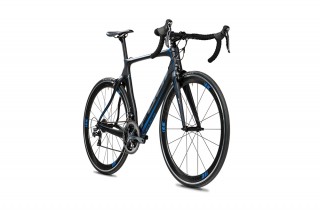 Relative to the other aero bikes tested, the Fuji Transonic is affordable, and it performs well overall. Photo: Brad Kaminski | VeloNews.com
MSRP: $4,700
Weight: 16.2 pounds
Size tested: 56cm (Medium/Large)
Overall Stars: 4/5
The Fuji Transonic was the third most aero bike in our test of four that also included the Cervélo S5, Wilier Cento1 Air, and Time Skylon. The Transonic only performed better than the Skylon when it came to aerodynamics. This didn’t come as much of a surprise, given that the frame features less aero shaping than the other bikes. Still, the Fuji felt fairly fast and performed as a solid middle-of-the-road sprinter.
When it comes to stiffness, the numbers don’t always tell the whole tale. Yes, the Fuji’s bottom bracket ended up being the stiffest in our test, but other key areas of the frame had enough deflection to degrade handling, particularly the head tube. That’s not to say this bike is unsteady; when we pounded on the pedals, the Transonic got up and went, but not well enough to wow us.
The numbers do (kind of) tell the whole tale when it comes to handling. The Transonic’s lab numbers point to a head tube area with plenty of deflection, and as a result it felt a bit twitchy in the front end. This is a fairly consistent complaint with most race bikes, but the Transonic could stand to be a bit stiffer up front for better control.
If you’re not thinking about the ride quality, it must be pretty good. The Transonic was comfortable enough for an aero bike, and we didn’t find it to be noticeably jarring. We wouldn’t want to take it on any long stretches of cobblestones, though.
Once the Transonic got up to speed and was cruising, it was very fast in a straight line. It didn’t get up and go as quickly or with as much pep as some of the other aero bikes we’ve tested, but it accelerated well enough that it could be a contender on the crit course. Overall, it’s a solid bike, but not outstanding.
There’s a lot to be said for an attainable price tag. The Transonic is spec’d very well for a bike in this price range, and while it’s not decked out in as much carbon as other, more expensive bikes, budget-conscious racers will appreciate the high-end bits it does come with.
The post Reviewed: Fuji Transonic 1.3 aero road bike appeared first on VeloNews.com.