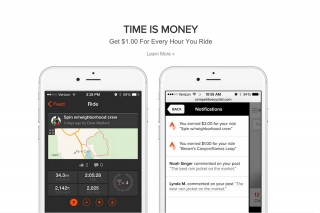 Competitive Cyclist announced Wednesday that it will suspend its program that was paying a $1 credit per hour ridden to registered Strava users. Photo: Competitive Cyclist
Less than two weeks after Competitive Cyclist announced a program that would pay registered Strava users $1 per hour of riding to spend on the online store, the retailer has suspended the program.
Strava users could sync their accounts with a Competitive Cyclist reward account on the retailer’s homepage. For every hour ridden, Competitive Cyclist would add $1 to a rider’s customer profile on its website. However, the credits were capped at 40 per month and expired after two months.
In an email to customers, Competitive Cyclist wrote:
“When we came up with the idea to pay you a dollar an hour to ride your bike through our partnership with Strava, it was pure, it was simple, and it represented everything we stand for. Apparently you liked it too, because you signed up by the tens of thousands and told everyone you knew. We had expectations and you blew them out of the water.
“Because of this we’ve had to pause new sign-ups, and we must stop issuing new credits beginning tomorrow, April 21. We’re already hard at work on a revised program that can support many, many more people. We will update you with the details of this revised program on May 19.
“If you have earned money, it’s yours to keep and we encourage you to put it towards something great. Those credits will expire on May 31 at 11:59 pm MST.
“Because you’ve already connected, when the program resumes, you’ll be ready to roll. We won’t do anything with your data and we’ll maintain the privacy policy we’ve always held.”
A spokesperson for Competitive Cyclist did not immediately return VeloNews‘ request for additional comment on the matter.
The post Competitive Cyclist suspends Strava credits program appeared first on VeloNews.com.