What's the strangest problem you've had in the bike? Mine was very recent, I was in a lousy bike and the bicycle handlebars got loose... I was some kilometers away from home so I really struggled to get there...!

I used to have this old bike that I got from the junk store, and it looked really cool but it was a nightmare to ride. The biggest issue was that the front wheel was slightly bent and it always sort of pulled to one side. It was also creaky as hell, it legit sounded like a haunted playground or something and it always used to creep me out when I was riding alone at night. At the time that I owned it I was living on a tiny island where everyone sort of shared everything, and when I moved off the island I left the bike at the ferry terminal for someone else to use. Which they do, it's become one of several 'community bikes'.

As crappy as that bike was, it got me up and down that island probably a thousand times...we had some interesting rides together

Other than that, I was riding the bus once and we were stopped at a light and a guy was crossing the street on his bike, and halfway across the front wheel literally detached from the bike and rolled away. I honestly don't know how that can even happen, it was like a cartoon or something. The guy did a nosedive over the handle bars and that was the point where the bus pulled away, so I'll never know how that story concluded haha.

The strangest and one of the most awkward problems I have had with my bike was a loose seat. I just set on a journey throughout my home town on my bike. I think I noticed something was wrong with it but I did not pay much attention. At one point it started becoming looser and looser, so it almost moved my bottom left and right and since I guess i was riding fast enough it just made my riding terrible. I almost feel off a bike a couple of times. Eventually, I had to stop, get off of my bike and tighten the seat.
C

In college, I had a police auction reject Raleigh that had a loose crank arm. bolt was stripped and repair was impossible. The two crank arms had about 20 degrees of slop which appeared at the top of the crank cycle. Other then that, it was a nice commuter bike and since I only had a couple mile commute, did not bother to repair it or even to lock it up. It got stolen once but the thief brought it back.

I feel bad, I abandoned it when I graduated and it is still probably showing up every year at the same police auction and getting selected by a needy student for basic transportation.

I've been quite lucky over the years to be honest when it comes to cycle malfunctions and the only one I can really remember was a pedal coming off.

While that's obviously quite serious I was luckily just going an average speed and was only a couple of miles from home.

As odd as this sounds I don't think any problem is strange there are just different type of problems.
Reactions: oportosanto
U

I've had 2 tuneups from 2 reliable shops within a month and my chain still keeps falling off. I though getting a new chain would make my bike ride better, apparently not..

Froze said:
As odd as this sounds I don't think any problem is strange there are just different type of problems.
Click to expand...

So finally what was the problem with your chain @Uawadall ?

It happened with my first bike when I was just starting with this activity. I was so eager back then to ride with my new found friends who are bike enthusiasts. The chain suddenly went off while I kept pedaling all of them laughed at me for looking like a joke.

My bike was serving me well for more than 25 years until it was stolen this summer. It only happened once that my chain broke, that is it. Not even a flat tyre. However, I had several issues with my friend's bike. I start to think he is doing it on purpose It is a shi*** bike and the bolts get loose sometimes so I always ride very slow. Once the seat came off. I felt it was moving but the road was bumpy and I stood up. When I tried to sit down i found out about this. I almost hurt myself more serious when the front wheel came off. Luckily for me I reacted instantly and put my feet on the ground and I was going slowly at the time.

I once forgot to tighten pedals after installing a pair of new ones and one pedal fell off when I rode. I was luckily able to find that fallen pedal and install it correctly when I got home.

Yep, that's strange lol. At the same time moneyman, I can't imagine how it was to get home only with one pedal. How have you done it, you walked?

I bought a brand new mountain bike on the cheap a few years ago, just for going about town and whatnot. Choose a cheap one because the chances of it being stolen in the city here are pretty high. Anyway, got it home and thought I'd take it round the fields near my house to try it out. A few miles out from home, I was going up a small incline and I decided to up the torque and power on through. Well, until about 3 revs in when the chain blew apart nearly throwing me off the bike to the ground! Had to push the bike all the way home. Was not happy at all.

Uawadall said:
I've had 2 tuneups from 2 reliable shops within a month and my chain still keeps falling off. I though getting a new chain would make my bike ride better, apparently not..
Click to expand...

Without any other clue the front derailleur is probably too high. On road bikes this is a pretty critical setting.

I've had two that I can think of,

First was when my shoelace got tangled around the base of the pedal which caused me to fall over in a scene that could have looked like it was out of a LoonyTunes cartoon. The weirdness comes when I add that my other foot was free, yet I still fell...

The other problem was when I was riding along a country road and had a flying stag beetle land on my left shoulder, resulting in me trying to frantically brush it off. I did not fall or anything and it flew or fell off after a few seconds but I must have looked a right idiot trying to swat at it.

Ouch, shoelaces can be dangerous, that is true... Ahah, never had issues with beetles though, at least when riding the bike. I used to fight them with beach rackets though!

oportosanto said:
Ouch, shoelaces can be dangerous, that is true... Ahah, never had issues with beetles though, at least when riding the bike. I used to fight them with beach rackets though!
Click to expand...

Since the shoelace incident I always tuck them into my shoes so they cannot get caught up again.

As for the beetles, I've only ever encountered them along one country lane so I only guess that they have a nest along there or something. At the right time of year though the road is full or them. I had a friend who hat at one with a cricket bat a few times when they were "hovering".

I do the same with my pants, as shoe laces were never a problem for me. Many times I put my pants inside my socks, I do look ridiculous I know, but at least I arrive clean at work.

The absolute worst problem for me is when I'm riding and I hear something squeaking or clacking and I can't figure out what it is. Drives me absolutely nuts.

Can't say any cycling problem is weird but on a ride up into the mtns my tire just shredded and split. Fairly new tire so I guess you could say it was weird. I had climbed up a pretty long 10% grade. After my tire shredded it flatted while I was trying to nurse it down the mountain. So I placed the extra tube and a boot and it was not holding very well. So I just decided to wait seeing the tire was not going to make it and no way would I try to descend a 10%.

So I called the wife but I had to wait 2 hours. I had a friend with me that had to go so he rode on and neither one of us could get cell reception. I had to ask him to call her when he got off the mountain.

That was the first and only time I was stranded in a bike out of the 20 years I have been riding.

My personal mechanic verifying that my tire is FUBAR! 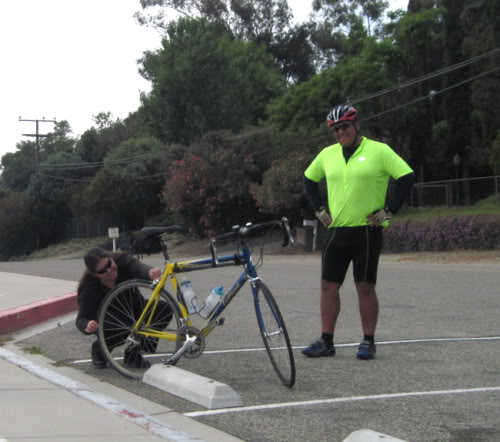 Reactions: oportosanto
You must log in or register to reply here.

B
Something Weird With My Eyes

Weird photos from the peloton!